Thankful for the man who grew the green pumpkin 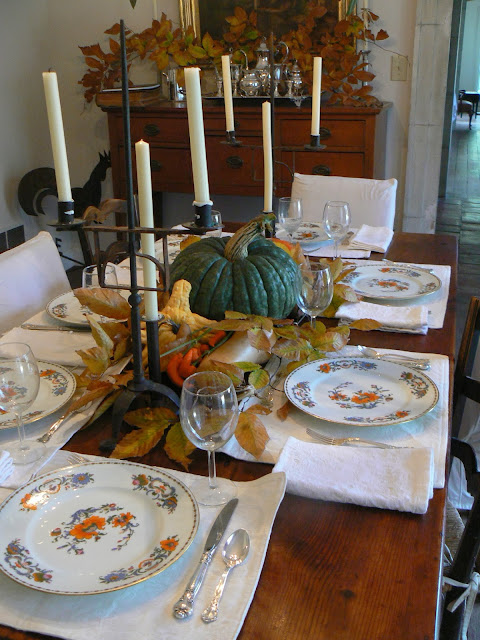 Last Sunday, which we call Harvest Sunday at our church, our minister told us to watch the movie It's a Wonderful Life to prepare for his Advent sermons.  I'm assuming he is going to talk about what difference our existence has made in other people's lives.  Or, is he going to ask "what if" someone had never come across our paths?  What would life be like?

I immediately thought of the man who grew the green pumpkins.

On the first Sunday in June  - I think it was 2008 - just as I was about to leave for church, he showed up at my door with a cousin.  "May we make a vegetable garden down at your farm?" he asked.  He had seen the farm that past December when he went down to clean out all the overgrown shrubbery around my late parents' house.

In the fall of 2002, when everything seemed very bleak, a workman quit and left a hole where my bathroom window should have been.  I had no idea what to do.  A friend recommended a landscape worker who could fix anything.  I begged his employer to let him come to see if he could put my window back together.

I can't even list all of the things he has done for me over the years.  I had a situation where the limestone surround at my front door started coming loose.  Several masons came to give me estimate, but no one would even touch it, much less give me a price.  So, one day the landscape worker stopped by and said, "No problem. I can fix that for you."

The same workman who had left me with no bathroom window also tore a two-story wall out of my house, and it stayed that way for over a year.  He kept bringing contractors to give me estimates.  I could have built another house for the amounts they came up with.  But in the end, no one wanted the job even at highway robbery prices.

Again, the man who grew the pumpkin walked in.  Within two days, he had put my house back together for the cost of wages and materials.

He and his family now have two large vegetable gardens at the farm.  They go every weekend and work, keeping the fences up and planting winter and summer crops.  He saves seeds for the next year's planting.

Which brings me to the pumpkin. This family man - he has three young daughters who are so sweet and polite and loving - works every day except for Saturday afternoon and  Sunday.  From his Saturday job, he acquired a green pumpkin last year when his employer discarded it after Halloween.  He took the pumpkin, and he and his wife cut it open and cooked the flesh, using some brown sugar and butter.  He also saved the seeds and planted them at the farm.

The result was seven large green pumpkins this year.  When the frost got the vines in late October, it was a fun sight to see these odd-colored pumpkins on the ground.  The deer hunter's children picked them up and loaded them into my car.  From there, the pumpkins made the journey to my church where they formed the centerpieces for a Flower Guild luncheon on November 10th.  Then, back to my car again and home to my basement.  Last Saturday, they went back to the church and were used in the giant cornucopia on the altar.  People were fascinated with the green pumpkins.

Then, on Tuesday, I went back to church to bring the pumpkins home.  On the way back, I drove to the airport to pick up my children.  At the moment I popped my trunk, I realized what they would see.  They are still laughing about that sight - a trunk full of green pumpkins.

So, Thanksgiving morning, the pumpkins safely back in my basement, my son-in-law and I chose one to use on the dining room table.  I picked some beech leaves and used a butternut squash from the farm to add to the centerpiece.

When we stood there saying the blessing, I silently gave a little prayer of thanksgiving for the man who grew the green pumpkin.  I don't know where I would be without him.  He's just one of those people who came into my life - I suppose he must have been sent to me when I desperately needed help.

This weekend, I'm going to return the pumpkins to him so he can save the seeds.  If all goes well, I'll have another green pumpkin on my Thanksgiving table again next year.