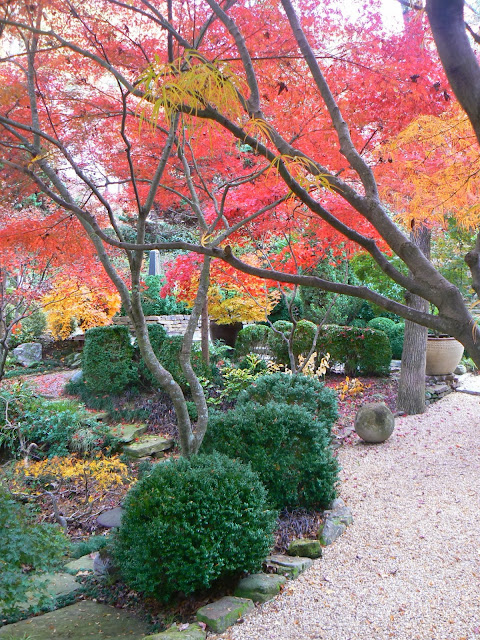 I am the proud owner of two new garden areas.  No, I only wish they looked like this.  I took this photograph in Bill Hudgins' Atlanta garden, right at the peak of his hundreds of Japanese maples.

But, I did have Bill in mind when I set out to tame a couple of areas around my house.  Due to the expense, I couldn't pave anything with stone, but I already had some square granite cut rocks rescued from a burned-out lodge next door (this was back in the mid-90's - another story for another time).

The stone is sitting all around my yard.  I had thought I'd end up in a little stone cottage somewhere, but that hasn't happened.  I can just picture it, with a slate roof, real shutters and roses climbing over the door.  But where is this going to be built?  I have no idea.  To be figured out in the future.

But back to what I have right now, thanks to the crazy idea I had of having my daughter's wedding at my house (which forced me to do some things).  There were two sketchy areas on either side of my house, and an eyesore of a garden down below.  Well, it couldn't be called a garden.  There used to be grass down there, surrounded by a hemlock hedge and a flower border.

But, the grass died, and to keep weeds from taking over until I figured out what to do, I put down black landscape cloth.  It was to be a temporary fix, but it lasted over 10 years.

Let me back up a bit because some other rocks figure in here.  I used to have 4,000 cobblestones (Belgian block - the big, loaf bread size ones) in my front parking court.  They came from where the Omni was built (hasn't that been torn down?).  They were never properly installed, and as the years went by, they kept sinking.  When it rained, I'd have a lake, followed by silt.  Sometimes you needed wading boots to get from the car to the front door.

On maybe the worst day of my life (not really, but it was unpleasant), a Bobcat driver came to dig them up.  I hired a dump truck to haul them down to the farm.  This seemed to be working out well until both the Bobcat driver and the truck driver quit after one day.  The Bobcat driver suggested I call a landscaper to come get the rocks, which had to weigh a zillion tons.  The truck driver made one run and said he would not do another one.

The nicest man named Buster came to my rescue.  He had a Bobcat and a dump truck, and he finished the project (he came back recently to make some new parking spaces for me - he is the best).

So, I replaced the cobblestones with pea gravel.  I like the look of it, but there are problems with certain kinds of cars getting traction.  Still, it's light years better than the sinking, uneven cobblestones.

The two new areas have some of the cobblestones as outlines and retaining walls.  The square-cut granite pieces from the house next door serve as steps.  I put in some boxwoods which I already had here (they'd been hanging out at the edge of the woods for 30 years, ever since we brought them from my mother-in-law's in Virginia).  I still lack moving another big one up to the "new" garden.

I now have two new garden areas.  One is a narrow, organized space with three iron arches, tiny pea gravel, cobblestones and boxwoods.  I may have some roses next year, if I can keep the deer away and do a better job of fertilizing.  The other is a big rectangle, a nice space for a party if I would ever have one.

It all looks pretty good because of the elements represented above, without the brilliant Japanese maples, of course.  All I had to do was buy the pea gravel, which wasn't nearly as expensive as I had anticipated.  I have some Confederate jasmine going up the arches on one side.  I hope the roses will take off next year in the narrow area of sun alongside the house.

Come April, before the mosquitoes arrive and when we have some pleasant days, I'm going to sit out there in the mornings with my gravel and stone and boxwoods and read the paper and drink coffee.  Something to look forward to on this frosty morning.