A peaceful scene for this day of remembrance 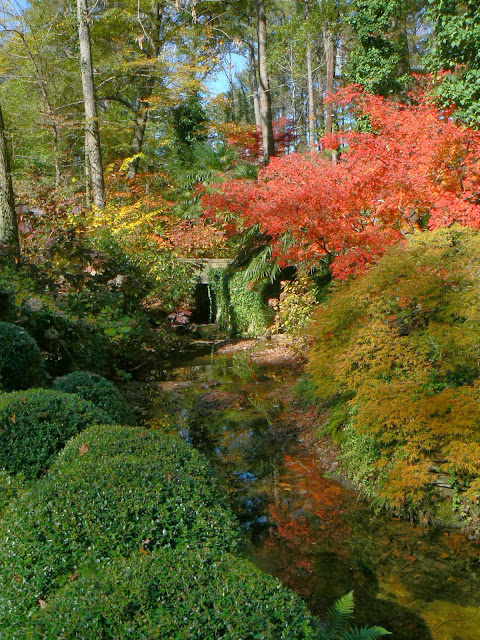 My dearest uncle died this year.  He had been a World War II hero, having spent the winter of 1944-45 in the Vosges Mountains of France.  It was a cruel time - not enough warm clothing or even any boots, freezing cold temperatures, snow and ice on the floor of the forest.  Still, my uncle's unit slogged on and drove the Germans back, and by the spring, arrived in Berchtesgaden.

I think I may have written here about his memorial service.  I had a black eye at the time, and a friend had lent me some concealer, which I had caked on heavily.  All was well until a bugler stood at the back of the historic Presbyterian Church in the town of Monticello, Georgia, and played taps.  I lost it, as well as all of my concealer.  I looked down at my crumpled tissue, and it was flesh-colored.  At the reception afterwards, my aunt said she had not noticed my black eye when we gathered before the service.

Every year, I called my uncle on November 11th.  In our last conversation, he was very cheerful and thanked me.  Then, he asked how my mother and daddy were getting along.  My heart sank.  My parents had been deceased for several years.  I just couldn't believe that he was starting to get dementia. He had been the one in the family who was the executor for everyone's will.  He took care of two of his nephews after they lost their parents.  He was the youngest of nine children, and until this summer, the only survivor.  We all leaned on him.

A few years back, I found a bunch of his letters in a suitcase in my parents' attic.  There were a lot of pictures of him, as well.  The letters were addressed to his mother and to my mother, his sister.  The ones to his mother, many written in pencil, said he was doing just fine.  You would have thought he was on a vacation.  In the letters to Mother, he admitted that it was very cold, but there was no hint of the constant danger he was in nor of the true misery he had to endure.

I have a lot of colorful fall photographs, and I agonized over one that would set the tone for this day.  I finally chose this one because it is not sad and reflects the calm disposition of my sweet uncle.  He was loved by so many, and I will forever miss him and remember his comforting voice and his gentle ways.  He was a true hero, but he never talked about that cold, horrifying winter until he was in his 80's.  Somehow, though, he would always end on a cheerful note and manage to make you feel it was really not all that extraordinary.