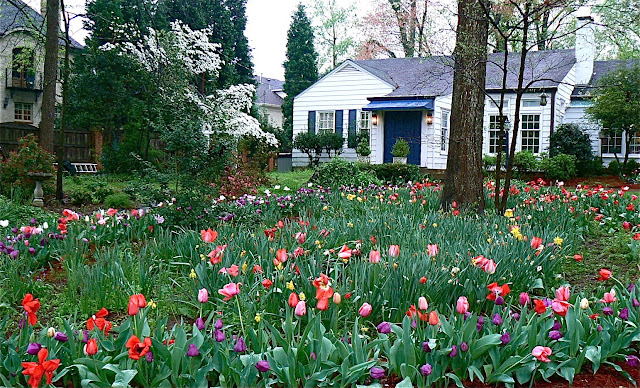 I walked into my Sunday School class this past week and was greeted with heartbreaking news.  Cy Harden had died.

Cy was known for many things.  He was the devoted husband of Mary Janet and loving father of Wes and three grandchildren.  He was a great friend to many.  Certain people in the criminal world feared him for good reason.  His profession was administering polygraph tests.  Knowing this, I always felt like he could see right through me.  I can't think of anything much I had to hide, but for some reason a bit of paranoia would spring up when we would talk in Sunday School.

Cy was an avid gardener.  For so many of us and for his neighbors, he was known as the Tulip Man.  Tulips are not perennial in Georgia, except for a few which will come back rather weakly and sporadically year after year.  But Cy would plant thousands of new bulbs every fall.  Then, in the spring, he and Mary Janet would host an open-garden tour.

A couple of months ago, Cy was diagnosed with thyroid cancer.  When I first heard the news I figured it was the non-aggressive type that spread slowly.  But it wasn't.  It turned out to be a particularly virulent form that is rare but deadly.  He fought hard, but succumbed in the early hours of Sunday morning.

In our class that day, we all told stories about Cy.  One newer member of the class said she had mentioned to Cy that she would like to start attracting birds to her yard.  The next week, he showed up with a bird feeder for her.

Someone else, a lawyer, said he had bumped into Cy on the street outside the courthouse one day about 18 years ago.  He told Cy that his client, who had been charged with a felony, insisted on taking a lie detector test. The lawyer thought the man was indeed innocent.  Cy looked skeptical, but said to send the man to him, and he would administer the test.  Cy was known to be one of the best and most trusted in the business.

After the test, Cy called up the lawyer and said in his low, gravely voice, "Dick, I think you'd better ask for a plea bargain."

I told a story, as well.  Cy was someone who frequently asked how my two daughters were doing.  He and Mary Janet had been in the Disciple class my husband taught.  They finished the course just before his sudden death on June 17, 1999.  Mary Janet came to my rescue when I was so overwhelmed with paperwork, I felt like I was drowning.  She and another friend, Alma Scroggins, came every Wednesday for months, going through packed files and boxes and getting me back where I could function.   I don't know how I would have survived without their help.

And then, one day in August 2002, when I was perhaps at my lowest ebb, when I was so stressed over caring for my parents who were in their 90's, holding down two jobs, and worrying about some family dynamics concerning my parents' assets, Cy came up to me at Sunday School.  My younger daughter was about to go off to college in a faraway place neither of us had seen before.  We thought the location would be good for her asthma, but it was daunting to think of getting her there and settled.

"Do you have anyone to take you to the airport?", Cy asked.  I had been so overwhelmed, I hadn't even thought about how I would manage the big suitcases.  Plus, our flight was to leave at 6 a.m.

I was so touched by Cy's thoughtfulness.  It was like I had been sent an angel, someone to lift the heavy luggage into a SUV and drop us off with no hassle.  Even more important was here was someone who would lift our burdens, as well, someone who saw in advance that a young woman would be missing her daddy on such an important occasion as going off to college.

A couple of weeks ago, the men in our Sunday School class had arranged for us to plant Cy's tulips this year while he was undergoing treatments.  We were all scheduled to go this coming Saturday to work in the yard.

We've postponed the planting, but we are going to get it done.  Cy won't be here next spring to show off his beautiful yard, but when the flowers bloom we'll all gather there to honor and remember a great guy, a friend to us all in his own quiet and thoughtful way.