Our hydrangeas made it across the ocean 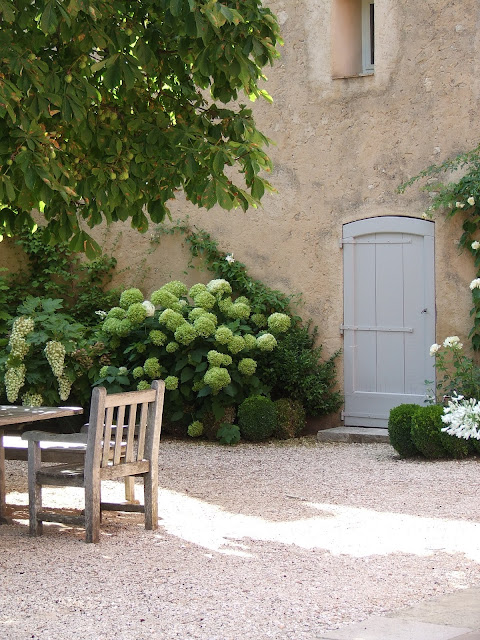 I hope it's okay that I am using this picture I found on Tara Dillard's blog.  Actually, I think it is a photograph from one of the blogs she follows.

On a cloudy day in early February 1966, I arrived in France for the first time.  It was the second semester of my junior year in college.  I was instantly hooked.  We went first to Paris, where I took a picture of a friend at the Palais de Chaillot overlooking the Eiffel Tower.  When our bus rolled into Aix-en-Provence in the south of France, I was taken aback.  The giant plane trees had been clipped back, with not a leaf in sight.  The next day the Mistral came down with a fury, making everything look gray and threatening.

But, when the sun came out again, I got used to the bare trees, which, of course, by the month of May had leafed out and shaded the wide Cours Mirabeau, the fountain-studded main street of Aix.

There is something about the aesthetics of the landscapes around the houses of Provence (not all, for sure) that appealed to me.  I liked the crunch of gravel and the way it came right up to the base of the walls, usually inside a courtyard.  The picture above has the idea, although there are foundation plantings around the door.

What struck me about this picture is that there are two American shrubs, which look totally in character for the scene.  One is Hydrangea quercifolia 'Snowflake'.  It is mind-boggling that this plant came from one spindly, almost dead shrub discovered in northern Alabama.  Eddie Aldridge and his father, a nurseryman, made only a few cuttings of the the plant, which had double blooms, rather than the single ones you see on the bushes that cling to the cliffs around Birmingham.  It's amazing to me that the plant is growing happily here in a town in France.

The other is Hydrangea arborescens 'Annabelle'.  A woman in Anna, Illinois, found big round blossoms on her wild hydrangea (I used to have these all over the woods, but the deer have mowed them down.  I haven't a one now, and the critters have decimated my Annabelles, as well).  From that one plant in the American heartland came all the Annabelles in the world.

It's striking that these two hydrangeas next to a door in France came very close to never seeing the light of day.  So many plants we cherish came from some anomaly on a single plant somewhere on this planet.  That is a daunting thought.  But, someone found them, and here they are.

I don't know where this picture was taken, but it does look like Provence.  I can see a white agapanthus on the right, and I know they thrive in the Mediterranean climate.

I am presently looking out at the Atlantic Ocean.  It's just amazing that these two very American plants made it all the way across and landed in this spot in France.  We are lucky that we have these hydrangeas, and so are the people who planted them next to their door so far away.