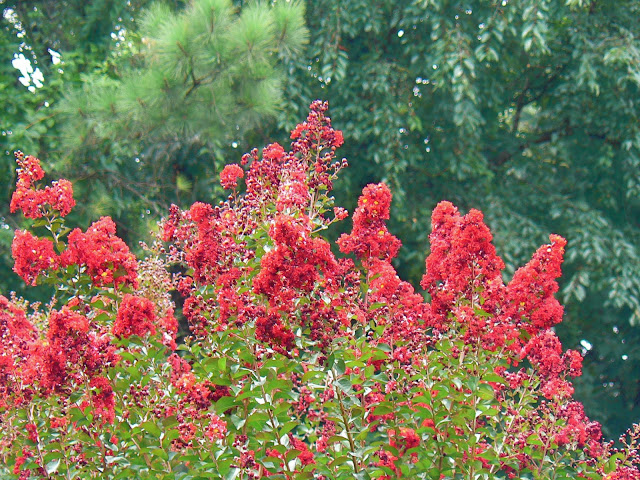 But not everyone can grow these heat loving plants, even if they are in Zones 7-9.  I remember standing in a beautiful garden in Seattle on Lake Washington.  It was one of those rare clear days when you could actually see Mt. Ranier.  I was transfixed by the snow-capped mirage and also by the range of vivid colors in this garden on the site of a former holly orchard.

The gardener had plants that people in Atlanta can only dream of - dark maroon, almost black leaved European elderberry (Sambucus nigra) that actually had grown into a giant shrub (here, they remain small and struggle with the heat).  She also had other plants with gorgeous dark maroon or chartreuse foliage that had actually stayed that way in mid-summer.  Plus, her dahlias were spectacular.  We can grow them, too, but they are best in late summer and fall and need to be heat-tolerant types.

Why, then, was she struggling to grow a crape myrtle?  We looked at her specimen, and she said apologetically that she knew the climate wasn't right for the plants.  "I've never had a bloom," she said.  "But, I keep trying."

Last month, I drove from Atlanta through South Carolina to Durham, North Carolina.  It was an embarrassment of crape myrtle riches.  Every shape and possible color was represented.

I don't have any crape myrtles at my house. I don't have enough sun.  Mother had light pink ones at the farm.  I went out on a steamy July day in 1973 in my long-sleeved, high-necked Priscilla of Boston wedding gown and posed for a picture.  Had the photograph been in color when it appeared in August in the newspaper, one could have seen the flowers of tall crape myrtles in the background. (An aside here - I had worked so hard on a tan, and that fact, combined with the whitish lipstick in vogue then, made me look like the "too-tanned girl" in the Seinfeld episode.  I winced when I ran across the clipping recently).

But back to crape myrtles and the title to this post.  I have sort of made it a game to i.d. the crape myrtles that have been severely topped in late winter.  I didn't do it on my drive to North Carolina, but I'm constantly playing a guessing game in Atlanta.  I can usually tell, because the branches seem longer and floppier (or is this the natural growth habit?  It varies so).  People do this, I guess, to control the size, and also because they believe it promotes more blooms.  A popular horticulturist and lecturer calls it "crape murder".

Woody plant expert and author Dr. Michael A. Dirr is experimenting with sizes and colors of crape myrtles.  He has introduced some that are truly dwarf like bright red 'Cherry Dazzle'.  There are others that never reach the heights of the well-known white flowering 'Natchez'.   Thus, nowadays, you can have about any size crape myrtle without any brutal chopping.  In the photograph above, the flowers were on plants that were maybe six feet tall.  They had never been topped and had reached their full-grown height.  Note that the flowers are standing upright.

I've not had any experience with crape myrtles, but I've observed plants that apparently had once been cut back, but the practice hadn't been continued.  In winter you could see knots and deformities on the limbs.  At our church, we have four beautiful 'Natchez' specimens that are not pruned back, but they are tall - maybe to 20 feet.


There is a long row of dark lavender crape myrtles on City of Atlanta property not far from my house.  They are cut back every year in late winter.  In summer, flowers appear only at the tips of the arching branches and aren't very showy. I always wonder what the trees would look like if they had been left to grow naturally.  Is this what the horticulturist means when she says crape murder?

One last thought.  I love the allee of 'Natchez' crape myrtles at the Atlanta Botanical Garden.  As you walk close, you are amazed by the richness of the multi-colored bark.  I'm wondering if you get this beautiful bark on trees that are cropped.  Maybe some of you with experience can weigh in on the subject.  Meanwhile, I need to be careful because this habit of crape murder stalking makes me a distracted driver.  I would like to know, though, if the practice is a crime, or not.


Note:  For the last two months, I have been working furiously on finishing the book about Margaret Moseley's garden.  I never dreamed it would take so much work.  I was on a deadline and had to put everything else aside, including this blog.  I hope to be back up and running on a regular basis soon.  My daughter is getting married at my house on October 5th, so there's another full-time job.  I confess I'm waking up before five o'clock every morning, worrying about everything that could go wrong.  By mid-morning, I'm okay and can see how it can all be a lot of fun.  We shall see.

Posted by Martha Smith Tate at 7:17 AM