If there could be some roses 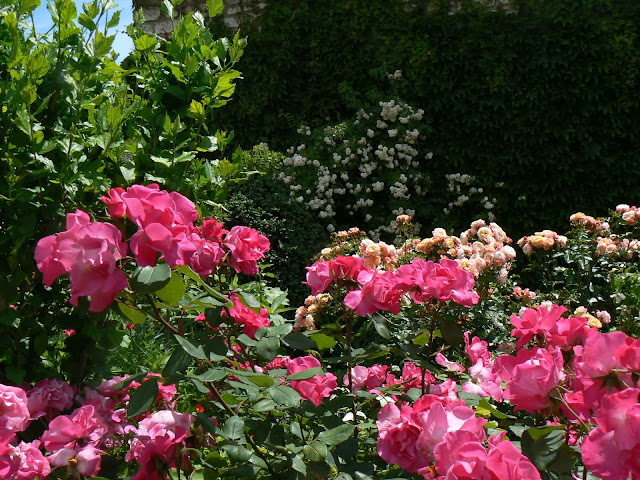 The February after I married, my husband and I decided we'd like to have a rose garden.  We bought those packages with the pretty pictures you see at the grocery store.  We picked out several colors.

We had moved into a little cottage in the woods, surrounded on all sides by tall trees, all of them deciduous.  That meant in winter, there seemed to be plenty of sun.  We planted the roses, not bothering to prepare the ground or adding any compost or fertilizer.   In March, the bushes began to put out and looked healthy.  By late April, there were fat buds, and in May we had some blooms.

But by that time, the sunny space was not sunny anymore.  In fact, it was in pretty deep shade.  Soon the black spot started, and the yellow leaves dropped off.  By the end of the summer, there were mainly just green stems.

I can't remember how long the bushes lived - not very long, I'm sure.

Twenty-one years of writing about gardens, going on tours, scouting for a TV show - one would think I could grow anything.  When I had to take down an enormous white oak tree that hung over my house, I was delighted to see I had sun, so much in fact, that the English ivy covering a tall bank all died from the western exposure.

I could see, too, that there were some spots outside my den window of what seemed to be full sun - enough to grow roses.  So, I put in my order, had some heavy iron arbors installed and piled on the compost and garden lime.  The roses came in April, and soon I had thick buds forming.

That lasted about a week.  My assumption that the deer wouldn't come right up to the wall of the house was wrong.  In one night, they ate every bud.

But that wasn't the whole problem.  The patches of full sun I'd counted on weren't there anymore.  I started moving some of the plants to the back terrace where the sun blasts almost all day long.  Things were fine until the chipmunks found it amusing to dig the plants up.  I put rocks all around the roots.  They just moved the rocks (how, I don't know), and had the plants out of the soil by the next day.

I am not going to give up.  I want roses.  I'll never have anything like the display in the above photo I took in the village of Giverny in France.  But, when things settle down a bit, I'm going to throw myself into making a success of at least a few climbing roses.  I don't know quite how I'm going to deal with the deer (the Milorganite molded with all the rain, and I used up I don't know how many bars of Irish Spring soap), but I'll figure out something.  A high school classmate told me I need to string up some fishing line, so I'll try that.

Next May, I hope to report here that I will be looking out of this window at a mass of roses.  I'm having a deja vu that I've said all of this before.  I'm comforting myself that I have spent all my time writing a book and just haven't had a moment to work outside.  There truly is one spot of sun, and I mean to coax some big, blousy roses out of the space.  I may even have a rose or two in October, as I just saw a bud emerging on a very spindly plant.  If I can outsmart the deer, this may actually happen.

Posted by Martha Smith Tate at 8:28 AM