Remembering Mother and her beloved peonies 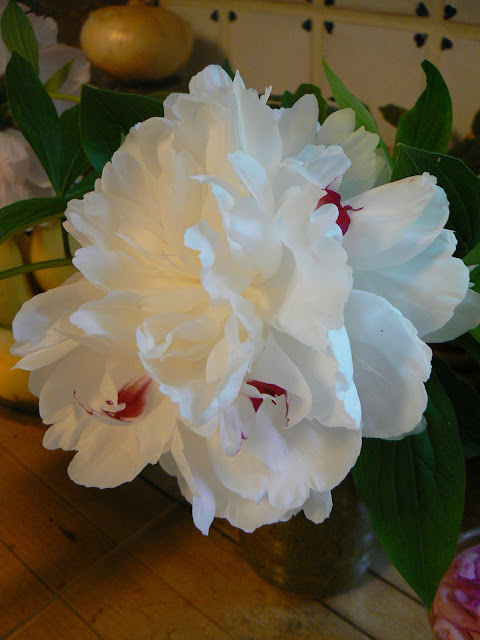 When I was in high school,  I wrote a paper about my daddy, how he had grown up poor, the third and unexpected child (his next sibling up was 17 years older than he) of my grandparents.  I related an incident that happened to him Christmas morning when he was six years old.  It brought tears to my eyes every time I thought about it.  At the end of the paper, I revealed that this person who had suffered disappointment but had rallied to be successful was my father.  The English teacher gave me a C (I was expecting an A+) and wrote MAUDLIN in giant red letters across the first page.

I had to look up what maudlin meant, so I'll never forget the word.  Thus, I am going to resist the temptation to describe my beloved mother in a tearjerker way.  She wouldn't like that anyway.

But I do want to say a word about her love of flowers, especially peonies.  An elderly lady in our town gave Mother two peonies, a white one with red splotches, like the one pictured above, and a pink one.  They had both come from the woman's husband's grandmother, so they were quite old when Mother acquired them in the early 1960's.

Every year around Mother's Day, the peonies would bloom and put on a show.  Mother was one to cut flowers and bring them in the house.  Her flowers were never organized into a "garden".  So, when I was living nearby (I had a few years of living in odd places in my early to mid-twenties - San Francisco, Taos Ski Valley, New Mexico, and Paris, to name a few), I would always go down to visit on Mother's Day.  And, there were the peonies, making for the most delicious fragrance when you'd walk in the house.

I've related before what happened to these peonies.  A well-intentioned person from the church came over and did some weed-eating for my parents when they were in their nineties and couldn't keep things up.  The pink peony had already disappeared.  I know my mother had wanted my brother's youngest daughter to have it, as she had greatly admired the flower when she was a child.

Mother was still at home when I went down for Mother's Day and went around the house to pick the peonies.  I found only a few pieces of foliage the weed eater had spared.  I was crushed.

To make a long story short, I was able to dig up the peony, although it was the year we had the bad drought, and the roots all fell apart.  I was aware peonies don't like to be moved, but I had little choice. I brought three pieces up to my house, and two have survived.  They are still not quite strong enough to produce a lot of blooms.  I think the plant really protested being brought away from my parents' more fertile ground.

The peony above came from Margaret Moseley, who will be 97 in a couple of weeks.   She told me she won a silver plate from the Rich's Flower Show back in the 1960's with this peony, which is 'Festiva Maxima', the same as Mama's.

For some reason, this particular bloom has lasted nine days.  Every day, the flower has gotten bigger and more spectacular.  I took this picture yesterday.  I guess it was holding on for Mother's Day. But, I promised I wouldn't be maudlin about this.  My mother had a good, long life.  I think of her every day and always send up a prayer of thanks for both my parents.

I just walked into the kitchen to examine the bloom.  It is still all intact, without a loose petal.  I'll change the mood here (just got teary-eyed) and say this is a great flower from the 19th Century - one that will do well in the South.  Yesterday, as I was riding around Atlanta, I noticed them everywhere.  If you don't have this one, order one with lots of eyes, plant it in September near the surface of the ground and enjoy the fragrance and beauty on Mother's Day in the future.