"Nothing is prettier than a 'Beverly Sills' iris" 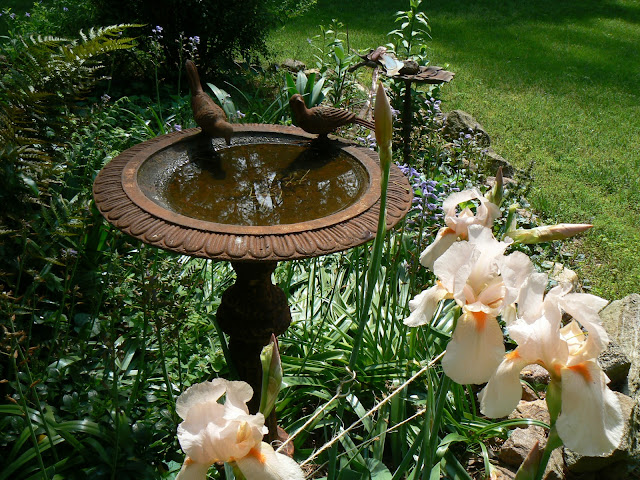 I literally have every available surface of my downstairs covered up with photographs and text, trying to finish a book on Margaret Moseley's garden.  The more I go over the material, the more I realize what a great inspiration Margaret has been to so many people.  And how funny she is.

When I took my computer out to Margaret's house earlier this spring to make a final selection of photographs to use, she said in amazement, "I can't believe I planted all this."

She also took notice of the fact that I had dozens of photographs of her rust colored iron bird bath.  She jokingly said the reason I took so many pictures is because I secretly wanted it for myself.

The real reason I have this bird bath in so many views is because Margaret has planted around it in so many different ways at different seasons.  In winter, it's backed by Daphne odora and Camellia japonica 'C. M. Wilson'.  In April, there's a patch of bright blue Scilla hispanica at its base.  One year she had copper iris planted next to it.  The color of the flowers echoed the rust hue almost perfectly.   I even have a photo of the bowl filled with ginkgo leaves that had fallen in November.

As I was going over all the quotes Margaret had given journalists who did stories on her garden, I found this one more than once. "Nothing is prettier than a 'Beverly Sills' iris."  I have to laugh, because  Margaret has said the exact same thing about dozens of plants.  That's okay, though, because she's had so many wonderful flowers during her forty-five years of gardening (Margaret started her garden at age 52;  she'll be 97 in two weeks).

So, from now on, I'll be careful about photographing the rust-colored bird bath.  Pictured above is its incarnation with Iris 'Beverly Sills'.  I do want to bring up a combination I saw in another garden.  Someone had planted the peach-colored, David Austin rose, 'Abraham Darby,' next to copper fennel.  Coming up alongside the latter was Iris 'Beverly Sills'.  All that person needed for a perfect composition was Margaret's rusty bird bath.