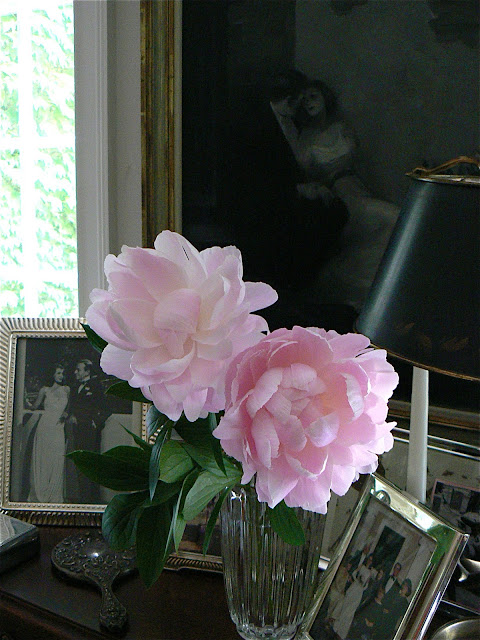 Time goes by so quickly that I hadn't checked to see if any peonies were blooming.  Last year, my prized 'Mrs. Franklin D. Roosevelt', for the first time in 30 years, did not bloom at all.  I was always told that peonies needed exposure to cold to bloom.  I don't recall that we had a particularly mild winter of 2011-12.  I know this past winter seemed milder than usual.

But, much to my delight, I looked down from the back balcony (it's really a concrete deck, and I usually call it that) and could see some flashes of pink through the foliage of the trumpet vine on the trellis.  Only two flowers were totally open, but I went back in the house for my clippers.  There's no reason for these gorgeous flowers to go unseen.

My friend from high school gave me several books to read about FDR, so I was immersed in the Great Depression and World War II for most of the spring.  I learned more than I wanted to about Eleanor.  I did admire most things she did, but I was a bit taken aback at her parenting skills.  Let's say she was not warm and loving like my own mother.

Anyway, this peony, which if you think about in today's terms, would probably be named 'Eleanor Roosevelt', was the winner of the American Peony Society's Gold Medal for 1948.  It is an exquisite flower - huge and fragrant - with the loveliest form.  I kept going in the living room yesterday and this morning to admire the blooms.

Peonies are so fleeting down South, but we are about to have a few cool nights, so I think I'll have more flowers to cut after these fade.

A little about the setting:  The flowers are sitting atop an antique mahogany chest.  The painting in back is an illustration by Allen Palmer, who died in a plane crash in Virginia on his way to a one-man show in New York in the early 1950's.  The paintings he took with him were lost.

You can see that the illustration (which is done in oil and appeared in a magazine in the 1940's) shows a couple in evening clothes.  In my Cole Porter piano book, I saw a photograph of Fred Astaire and Rita Hayworth which reminded me a lot of the painting, so I cut it out and put it in a silver frame.  My grandmother's mirror is lying on the chest.  Her monogram is engraved in beautiful script on the back.  A nice backdrop, I think, for these beautiful peonies.