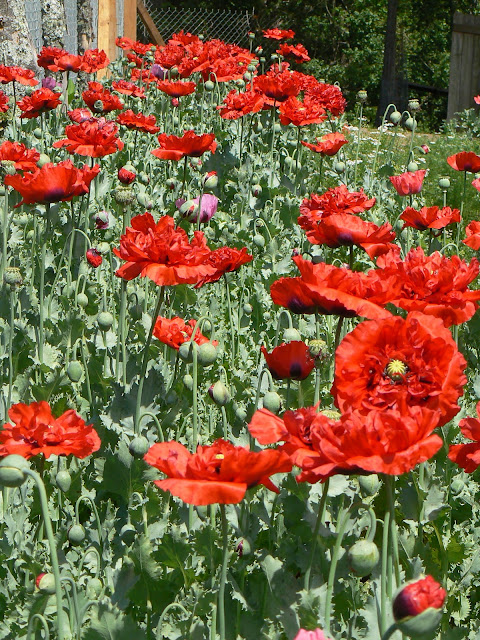 My mother would not believe what has resulted from the little envelope of seeds a friend gave her long ago.  For years, in a flower border underneath her kitchen window, Mother grew a few cherry red  poppies.  Hers were shaggy - very double - with narrow petals.

Some years, she would save seeds gathered from the spent pods and put them in the freezer.  Mostly, though, she depended on the ones that came up volunteer.  The flowers pretty much looked alike from year to year.

But, after Mother turned 90, the flower border got out of hand, and the poppies disappeared.  Finally, I cleaned out the bed one fall, and early the next spring, the poppies started coming up.  Mama was so relieved that the seeds had survived.

The poppies have bloomed every year since, and some new colors have appeared.  Last summer, I marked several plants while they were still in bloom.  There was a lavender one that had sprung up, so I  tagged that one.  Also, I marked the ones that looked the most like Mother's favorites.  Then, I forgot all about what I had done.

A little history here.  Mother and Daddy bought the farm in 1957.  For several years, they would ride over from town and count cows.  I remember watching them drive off in the old dark blue Air Force jeep for the daily inspection.

After several years, Mother and Daddy decided to move from our 1852 brick home in town out to the farm about three miles away.

I still have mixed feelings about this.  It was hard to leave a house on five acres that was built before the Civil War and that was the best place to grow up you could ever imagine (lots of hideouts, vegetable and flower gardens, orchards, trees to climb, outbuildings that could be used for forts, and possibly one of the best hide-and-seek venues you could wish for.  There was even a eccentric old woman who lived in a scary looking house on the other side of a tall privet hedge).

Anyway, in 1963, Daddy built a house at the farm, and our homeplace was sold.  My parents enjoyed the place well into their nineties.  My brother and I have it now, and it has become a weekend retreat for some friends who go there to grow vegetables and just enjoy the beauty.  They also have restored Mother's flower garden and made several new ones.

Last week, one of them said I should see the flowers at the farm.  It rained almost every Saturday in May, so I hadn't made my usual weekly trip down there.  I didn't think much about it until I drove up and saw a brilliant red strip of papery flowers glowing in the sun.  Mama's poppies.

I wish my camera had the capacity to capture the entire row.  It must be 100 feet long and eight to ten feet wide.  It's amazing that all those flowers came from that one envelope of original seeds.

It will be interesting to see if  there will be even more colors and forms next year.  I can't believe I didn't even know these were coming up.  My friend had seen the plants I marked and gathered the seeds, so it was a great surprise.  I was so thrilled, and I know Mama would have loved knowing her poppies were still going some 50 years later.