Dreaming of a English stone cottage in the U.S.A. 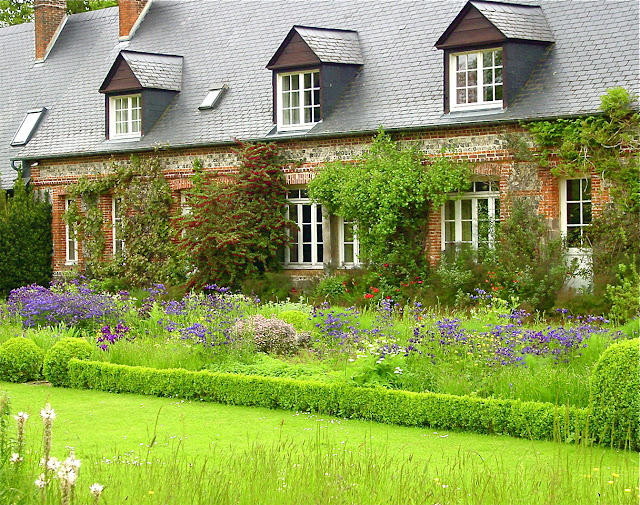 Back in the early 1990's, the big stone lodge on the hill above me burned.  It had been vacant for some time, and local teenagers could be heard screaming on weekend nights.  It must have been a gathering place, and I can imagine it looked spooky in there.

On a Friday the 13th in November of that year, there was unusual activity.  You could hear cars going in and out, and the screams and laughter echoed down the hollow to my house.  The next morning early, I came down with the dogs and was lying on the sofa reading.  The dogs were restless and kept whining.  I started hearing popping noises and got up and went to the door.  The sky was lit up red, and for the slightest instant I thought to myself, "What a beautiful sunrise."

But then it occurred to me that I was looking toward the southwest.  That's not where the sun comes up. Then, I saw the flames.  I called 911.  It seemed forever until the fire trucks came.  There wasn't much they could do.  The house was way back from the street, and it was a huge fire at this point.

Nothing was left but a couple of walls standing and a small front porch.  I don't guess I'd ever been around a ruin like that.  The sides of the house were faced with granite, cut into rectangles and squares.  Some had been scorched, but most of the stones looked undamaged.

Fast forward a few weeks.  Kathryn MacDougald and I got permission from the owners' son to remove what stone we could.  Kathryn was interested in bigger rocks that had been part of the landscaping.  I wanted the squares and rectangles of granite.  She and I spent days, maybe weeks, up there with a crowbar and a pick-up truck.

I ended up with enough stones to make myself a little cottage.  I'd like something with casement windows, dormers and a slate roof  And, out in front, I want a cottage garden.  But before I get this stone cottage built (where on earth is there a lot for it?), I want to go to England, preferably when the roses are blooming.  I know there's a cottage there somewhere I could copy.

I'm posting this picture, which is actually a very long converted stable, I think, in Normandy in France.  The man who did the gardens, though, was English and a protege of the late English garden writer and designer  Christopher Lloyd of Great Dixter.  In fact, we saw a magnificent orange-blooming spirea that had come directly from Christopher Lloyd's garden.

I sort of want this same feel for my future abode.  Mine would not be brick, though.  The stones are all still stacked along my driveway and form a rough wall in the back parking place.  I also have 4,000 cobblestones which I took up from in front of my house and replaced with pea gravel.  If I can just find the right lot somewhere, I want to make a cottage garden, bordered in boxwoods and spilling over with flowers.  I want roses to climb the walls, and I want to go out every morning and pick flowers to bring in for the day.

In the meantime, I'll keep looking at the stacks of rocks - it's now been two decades since I rescued them.  I hope they'll have the proper home someday, clinging to the sides of my cottage in a sunny space, a place where the deer don't roam.