Diana has the roses I want 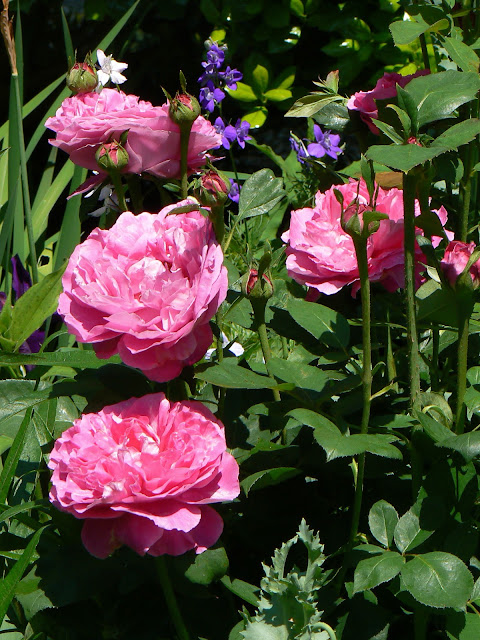 I'm betting Diana Mendes doesn't know the name of these roses (which look incredibly like peonies).  That's okay.  She buys what she likes and doesn't worry much about having to keep up with names.  When she's in a garden center, she instinctively knows what will look good and buys accordingly.

But, hers is not just a rose garden.  The above flowers are tucked into a jam-packed sunny border in front of Diana's Atlanta home.  Surrounding these healthy blooms is a colorful array of May flowers -  larkspur, which re-seed each year, hesperis, iris, foxgloves, poppies, hardy geraniums, coreopsis, alliums and clematis, to name a few.

I had written earlier that I planted some climbing roses this year, now that the removal of a huge white oak has allowed for some sun.  But, all has not gone well.  I wanted a rose just like the one pictured above, down to the color and form.  I bought my roses from a mail order source which sells only own-root plants, meaning that they are not grafted.

After I received the roses in April, I got them into the ground immediately.  It wasn't long before thick buds formed.  I wasn't familiar with either of the pink ones, so I was anxious to see the blooms.

But, that was not to be.  I assumed that the deer would not come up to the walls of my house. Wrong.  They (I guess there were several) left tracks in my new tiny pea gravel and snipped off every single bud.  This, despite the fact I'd put down Milorganite around the plants.  This fertilizer from the city of Milwaukee has done a pretty good job of repelling deer in the past.

It could be that one of these days I'll have pretty roses like Diana's.  Sharyn Altman, a high school classmate and a very knowledgeable gardener, told me about some fishing line I could try.  On Friday, I dug up some of the roses and moved them to large containers on the back balcony.  Until I get that fishing line and string it up, I'm going to make sure the roses are safe.

Diana Mendes always has a heavy flush of bloom on her roses in fall.  Maybe by then, I'll know if I have a rose that looks like the ones pictured above.  That's what I was going for.  We'll see.