What to do with a big hosta? 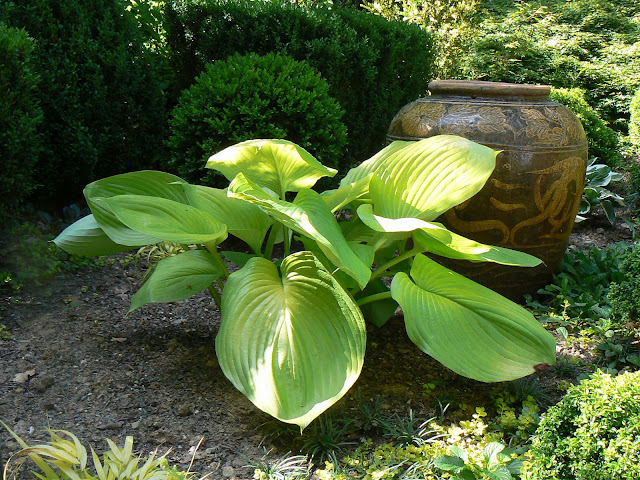 Years ago, Margaret Moseley gave me a piece of her Hosta 'Sum and Substance', a large leaved, yellowish hosta.  Mine has survived a tattering by an April hailstorm (which also tore the leaves off all my trees, broke windows, two windshields and destroyed my slate roof) and being moved twice.

But now, there's a destructive force that I cannot seem to stop - the deer.  I start off the season doing pretty well.  I use Milorganite around it to ward them off.  That works for a while.  In other times I've used sprays and Irish Spring soap.  The Milorganite, a fertilizer produced from sludge from the city of Milwaukee, Wisconsin, works best.  But only for so long.

By the end of the season, I become lazy and don't remember to put out the granules.  Or, the deer have gotten used to the annoying smell and help themselves anyway.  I end up in the fall with a few ragged stalks.

I thought about moving the plant back up here to the house (it's at the cottage now).  But, the deer have already proved that they don't mind coming right up to the walls of my den.  They've eaten all the buds off my new climbing 'Iceberg' rose.  I had one bud left, and I was looking forward to seeing the bloom. But they came back and found it.  Oddly enough, they're not eating the 'Gruss an Aachen', well, not yet, at least.  All of the roses and the hosta have the Milorganite around them, so I guess I'll have to try something else.

The above 'Sum and Substance' is not at my house.  This is in Bill Hudgins' Atlanta garden.  I love the way he's positioned the plant against the urn and boxwood.  The composition really shows off the hosta's bold leaves.

I need to act quickly.  We have a couple of days before it rains again.  My friend who lives in the cottage says her dogs have eaten all the Milorganite I put out.  I have some Irish Spring I can take up there, but then what?  It's too sunny on my balcony for the plant, so that's out.  I'm afraid I don't have a lot of options unless I can rig up something that would keep the deer out.

This situation is particularly painful, because for several years I went to Bud Martin's hosta sale in Stockbridge.  He is a professional grower and sells to nurseries.  Every year for a week, though, he has a private sale with over 500 varieties, from tiny ones to the large leaved kinds.  My heart beats faster just thinking of all the healthy plants in every possible variegation or color (chartreuse, blue, etc.).  You want every one you see.

But I have to stay away until I get a plan or a deer fence.  His sale started last Friday and goes through May 4th, 9:30 to 5:00 each day.  The address is 5305 Alexander Lake Rd., Stockbridge, GA 30281 (Summer Lane is his private drive).  Even if you're not in the market for hosta, it's fun to go and see all the beautiful plants massed together. I hope someday to go again, once I've figured out how to protect my prized 'Sum and Substance'.