One of many good things about March 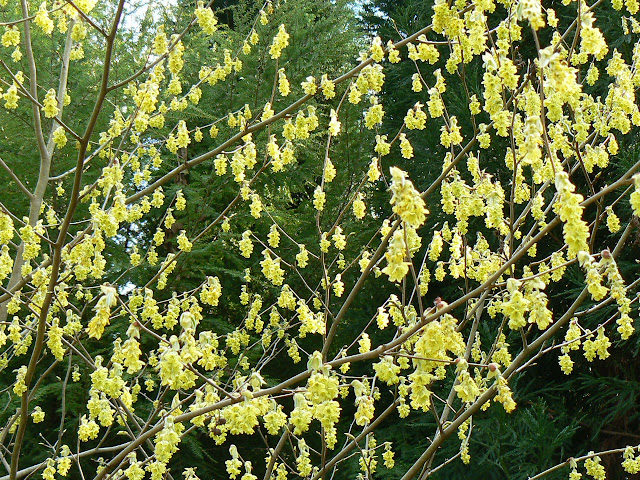 I confess the month of March makes me a little uneasy.  I can't help but think of spring storms and the beginning of tornado season.  Yesterday, it was not stormy, but it was very windy (what else would one expect of March?).  The lights flickered a couple of times, and I picked up a lot of branches that had fallen on the driveway.  I didn't even try for the obnoxious sweet gum balls that every breeze seemed to send raining down.

At my house, the real damage that has occurred from storms has happened in April, May and June.  So, why do I fear March?  One reason is that I once had a bad experience on a plane in the month of March.  This was back in the days when a certain airline painted its jets different colors.  This one was orange inside and out.  My friend and I boarded in Atlanta, headed to Colorado to ski.  She was terrified of flying, so she was already looking pale as we took off.

We bumped up through the air, and instead of that relieved feeling when you're finally above the clouds and in bright sunshine, the interior of the plane grew dark and ominous.  The turbulence got worse and worse as we climbed.  You could see nothing out the window but gray mist.

Then, all of a sudden we started going down way too fast.  Passengers, who had been making noises every time we had experienced a roller coaster falling sensation, now fell silent.  We all grabbed one another.  I was holding on tight to my friend and to the stranger on the other side of me.  This couldn't be right.  We weren't high enough to lose altitude like this.

I tried to look for the flight attendants.  They were nowhere in sight.  Then, we hit, but not the ground.  Presumably an air pocket or updraft.  I don't know how the plane stayed together.  Then, we started bouncing all over the place.  We'd go up, then down and hit hard again.  People started screaming.  I finally saw a flight attendant, and she was screaming, too.

It seemed like we went on forever like that, but it was probably only a few minutes.  Then, we suddenly smoothed out.  The pilot came on and said free drinks for everyone.  The worst was over.

That day, it turned out, was a deadly one on the ground, with tornadoes ripping through the Southern states.  My friend and I made it safely to Vail and had a great week of skiing.

This story has nothing to do with the photo above, except that I took it in the month of March.  I love this shrub, known commonly as winter hazel.  There are many species of the genus Corylopsis.  This could possibly be C. spicata.  I love the pale yellow racemes that appear before the leaves do.  The length of the chains varies with the species.  Once, someone had a specimen at the Southeastern Flower Show that had the longest racemes I'd ever seen, maybe four or five inches.  I tracked the guy down, but he did not know where the shrub had originally come from.

Still, the fragrant flowers of winter hazel are such a welcome sight as the weather warms.  This particular plant is perfectly placed (sorry for the alliteration) against a dark evergreen backdrop.  The effect would not be as spectacular if the pale yellow had to compete against light gray deciduous branches.

So, here's hoping the remainder of March will be gentle (there's a huge snowstorm right this minute in the Northeast) and that we can focus on beautiful, fragrant plants like the corylopsis rather than dark, angry clouds.