Catalogs started it all 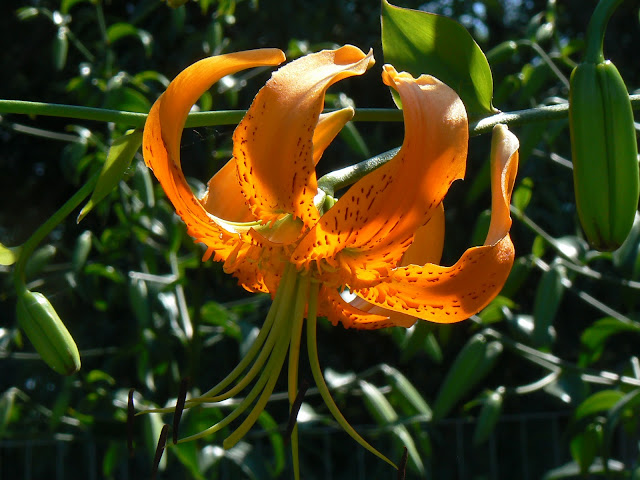 I don't know whether to thank or blame the people at Wayside Gardens for my obsession with plants.  After I got married, flower catalogs started arriving at this address.  I began studying them, especially the very informative ones from Wayside, as if they were college textbooks.  That is basically how I learned about plants, although my mother always grew flowers.  During my childhood, though, I took for granted the bouquets that were on our kitchen table.  I loved to go out and pick flowers - daffodils, roses, irises, lilies - but I wasn't interested in cultivating them myself.

When I finally settled down, I was guilty of ordering things that didn't stand a chance of surviving here.  I remember receiving some bachelors' button plants in June, only to watch them wilt and die in the summer sun.  Later, I learned that seeds of these blue flowers had to be planted in fall in the South because they bloomed in April and May and were considered cool season annuals (poppies and ox-eye daisies fall into this same category).

But, I still have some of the plants from my early days of ordering.  The Boston ivy that grows on my house is an example.  Another is a velvety red form of Campsis radicans, which I haven't seen for sale in years.

There came a time when I had to put a stop to my ordering, or even buying plants locally.  I was getting ahead of myself.  I had no places cleared and ready when the plants came, so I'd end up watering them in their containers for years.  I finally gave a lot of them away when I thought I was going to move.  Mercifully, others got planted.

When a catalog came about a month ago for summer-flowering bulbs, I fell victim again.  The moratorium on plant buying is over.  I do have someone now who can help me get things into the ground.  It's a great feeling, and I'm reaping the rewards.

The latest catalog I received features a lot of lilies.  When I went to Carl Lashmit and Vosco Angelov's garden outside my hometown last year, I went crazy.  They had all kinds of beautiful lilies.  I knew right then that I was going to have to figure out a foil for the deer so I could have some, too.  I had already watched my Lilium 'Casa Blanca' plants fall victim to the marauders.  In fact, I need to dig them up and see about putting them closer to my house with some sort of protection (Milorganite fertilizer works for a while, but then the deer wise up, or I forget to put more out; ditto Irish Spring soap and other repellents).

The orange tiger lily above was just one of the many lilies at Carl and Vosco's.  I can envision a riotous mix of summer flowers (the tiger lilies would bloom in late June and July, I think) I could tap for big bouquets.  I now have some sun which has opened up an entire new world for me after 40 years of shade gardening.  All I have to do is figure out the deer problem, which is considerable.  They love lilies, so I'll definitely have to outmaneuver them.

I have a catalog right here in front of me, and I'm going to fall back into my old ways.  I'll place the order and worry about what to do later.  I'll make it work somehow.  I need lilies!