Backing up the bench 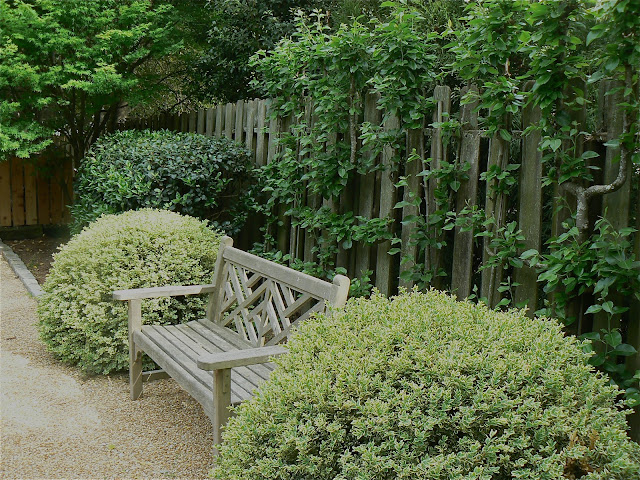 One of our episodes of A Gardener's Diary on Home & Garden Television featured a garden in Oregon. I remember several things about that show, even though I never went there in person.

One, the gardeners had shaped a plant of Lonicera nitida 'Baggesen's Gold' to look like a Volkswagen beetle.  That's hard to forget.

Second, they had incorporated several bulbs of Allium christophii into a flower border.  Of course, I planned to copy this, but never did.

The third thing that stuck with me was the two gardeners talking about a bench.  "You always want something at your back," one of them said.  "Otherwise, you feel vulnerable."  I can see why they said this.  Their garden was built on about one of the steepest slopes you can have and still grow things.  The bench in question was set against a sort of hedge of English roses, either 'Heritage' or 'Gertrude Jekyll.'

I don't know how comfortable I would be with roses at my back.  I guess it would depend on the thorniness.  The above bench, or garden seat, as they say in England, looks pretty ideal to me.  It is made cozy by the two variegated boxwoods on either side.  Espaliered on the fence are apple trees, which would yield sweet scented blossoms in spring, then lush green foliage in summer and apples in the fall.  It looks out onto a knot garden designed by the late Rosemary Verey for the owner (my sometimes tennis partner Mary Wayne Dixon) on the site of a former swimming pool.

Another point the two gardeners in Oregon made was that you don't want to grow anything underneath the bench or where you would rest your feet.  I think that's a good idea, as you don't know what could come crawling out of a ground cover.  I would never be afraid to sit on the bench pictured above.  It seems perfectly safe in every way.

So, this brings me to a limestone bench I have.  It is backed by a wall of English ivy, which always seems to be criss-crossed with spider webs. Underneath is just some dirt and a few rogue strands of ivy from the wall.  On one side is a rose that is still in a container from 20 years ago.  It blooms valiantly every year.  Now that I have sun, I vow to free it this spring.

There is absolutely nothing inviting about my bench.  It faces northwest, meaning it gets little sun (a hemlock hedge shades it from the western sun) so is always cold and damp.

I now officially have a new little garden.  Not the dream pocket garden I started last year, which looks like a nightmare.  This one is all new, with cobblestone retaining walls, wrought iron arches, a walkway covered in tiny pea gravel, and a boxwood border on each side.  This is all in the space that was formerly occupied by a giant white oak tree that had to be taken down.

Today, two garden helpers came and moved some tall ivy topiaries I've had sitting around for 11 years. I never knew where to put them.  After one of the workers pointed out that I did not have two matching English boxwoods (they're all in a clump down near the woods), he suggested using the ivy topiaries instead.  I will say he was right.  He's going to fix them permanently for me at the entrance to the garden.

But back to the subject of a bench.  Maybe it's time to move the never-sat-upon limestone bench to a place in the sun.  I have a teak bench I could use, but I like where it is now.  So, I think next week's project will be rescuing what could become a garden seat and placing it where it can fulfill its intended function.  I could have something at my back (a boxwood hedge) and tiny pea gravel underneath.  All I would need would be some time to sit down and just enjoy being outside.  That probably won't happen, but it's nice to think about anyway.