This is not a dogwood! 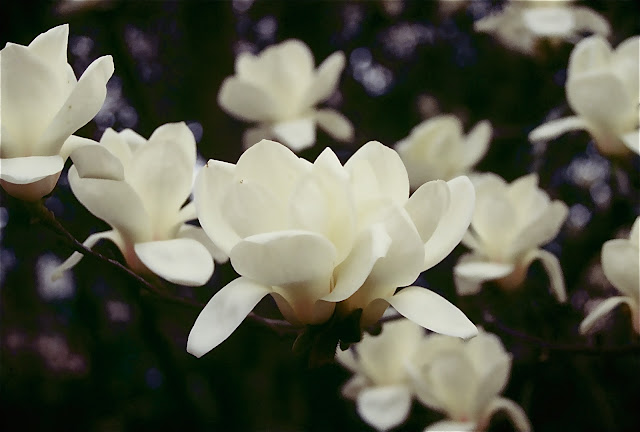 It never fails.   Every year in February a local television anchor will say,  "I saw a dogwood in bloom yesterday.  They are really early this year."  I'm not the type who actually calls the station to correct the error.  I just talk back to the TV.

"That's not a dogwood," I'll say with irritation.  "You do this every year.  Dogwoods don't bloom in February - ever!"  It's normally (but what's normal anymore?) the beginning of April when first the white Cornus florida, our native dogwood, blooms.  The pink-flowering ones are generally a week or so later.  However, there are years when both open at the same time, and everything, including the most commonly planted azaleas will bloom all at once.  But, it sure isn't in February.

What the on-air personalities are seeing this time of year are deciduous flowering magnolias from Asia.  Depending on the species, they are usually of two types.  The first to bloom are the star magnolias (M. stellata), which are likely the ones mistaken for dogwoods.  Then, the tulip, or saucer, magnolias begin to open.  The latter come in different shades of white, pink, deep pink, purple and burgundy. The early blooming ones are generally pink. They are also the ones that get hit hard by a freezing spell.  We'll have a couple of weeks of warm weather in February, and the tulip shaped blossoms open. All of a sudden, the temperature will dip down into the twenties, and the delicate flowers turn to brown mush.  Oftentimes, you'll see big trees that have suffered thusly.

The above flowering branch belongs to Rhoda Ingram of Griffin, Georgia, who decades ago began collecting deciduous magnolias.  These particular blooms are on a grand specimen on the edge of her park-like front lawn.  Rhoda wasn't sure of the exact species of this tree, as its blossoms match neither  M. x soulangiana or Magnolia denudata.  Whatever its identity, it was one of the most beautiful flowering trees I've ever seen.

There is a yard not far from where I live that has both the stellata and the x soulangiana.  Both are white.  I'll have to check the next time I ride by if they blooms were hurt in the freeze over the weekend.

In the meantime, if you hear someone on television say that the dogwoods are blooming early this year, you'll know the truth.  These are not dogwoods.  We'll have to wait another month and a half for those.