What to do about a rose? 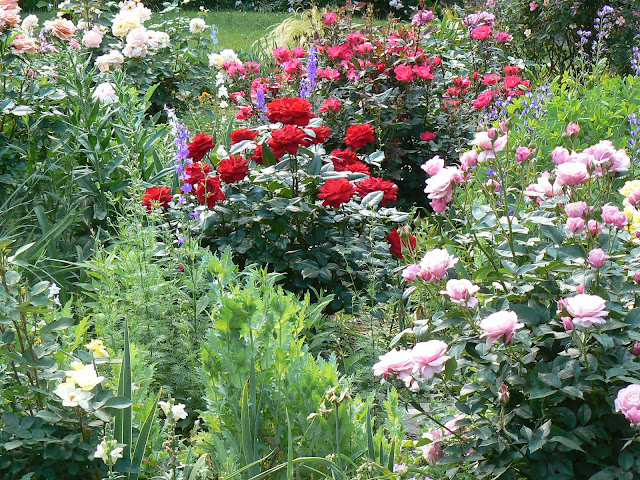 What to do?  I now have one sunny spot opened up on the side of my house, due to the loss of an enormous white oak tree.  For the first time in (ulp!) forty years, I have enough sun to have a rose.  I want a climber.  So, I e-mailed Pat Henry, who owns Roses Unlimited in Laurens, S.C., and told her about my space and gave her all my specifications - some form of pink, very cabbagy, fragrant, repeat bloomer, not rampant or lethally thorny like 'New Dawn', but a reliable grower.

Pat wrote back and suggested the climbing form of the antique rose 'Souvenir de la Malmaison'.  She also suggested 'Bantry Bay'.  I am now over here writhing in indecision.  I e-mailed Pat that I wanted 'Bantry Bay', so she reserved one for me.  But now I'm thinking 'Souvenir'.  I change my mind every few minutes, and you'd think I was choosing a baby's name that would have to stick with him forever.  It shouldn't be such a big deal.

But one spot of sun that is close to my house, right outside the room where the dog that barks at the deer sleeps, is all I have.  So, I must have the right rose.  I've spent way too much time on line reading reviews.  Some say that 'Souvenir' doesn't open in the rain.  Another complained that 'Bantry Bay' took a long time to reach a decent height. I am a francophile, and to have a rose with a French name intrigues me.  And, it's such a famous rose with so much history.

The more I look and read, the more I want everything.  Before the deer came, I used to have 'Buff Beauty' and loved it.  I also like 'Penelope'.  Those are both Hybrid Musk roses, I think.  Then, I remembered Brooks Garcia's light yellow English rose 'The Pilgrim'.  And, then there's 'Graham Stuart Thomas' and its odd yellow color that looks like nothing else.  It could be trained up the side of the house, although it doesn't get very tall.

I have to make my order out soon.  Pat grows own root roses, meaning that I will never end up with 'Veilchenblau', the bluish-mauve rambler that must have been the understock to a tree rose I once had.  It grew into a monster.  Pat's roses start out small, but then they come into their own and are sturdy and will never turn into something you didn't order.

The photograph above shows several different roses in Diana Mendes' Atlanta garden.  Diana didn't agonize over any of these.  She saw them in bloom, liked them, didn't care where or when they were introduced, bought them and never knew their names.  In May and October, she has loads of blooms and even some throughout the summer.

I wish I could be like this.  But I feel like I have only this one spot where the deer won't bother, and I just have to have the right rose.

I'm giving myself until 9 a.m. tomorrow to make up my mind.  I'll let you know what I've decided.  I have a list in a notebook beside the computer, and it has grown and grown.  I'm up to eight roses now and only one space.  Maybe something will come to me in a dream tonight.  I hope so.