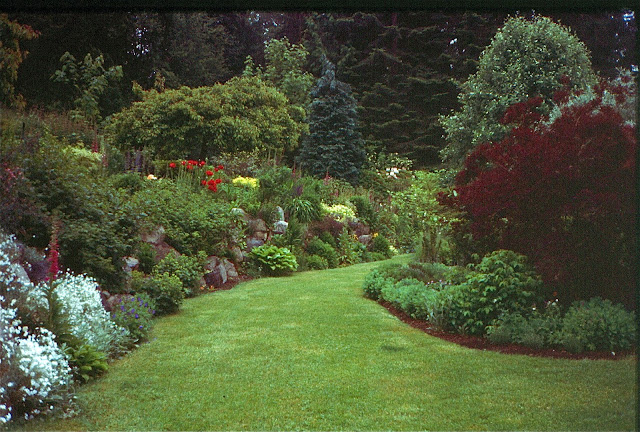 My friend Katherine Coleman sent me some pictures yesterday of Butchart Gardens in Victoria, British Columbia.  The photographs were taken in fall, when the Japanese maples were at their peak, and the foliage of other colorful trees was at its most brilliant.  The pictures were dazzling.

The famous garden's organization of pathways and intensive planting reminded me of this garden on Whidbey Island, Washington.  I remember turning into the drive, going slightly downhill past a picturesque apple orchard on the left.

Then, right below the orchard was a long, rectangular parterre, made of variegated boxwood.  This area of clipped symmetry was a surprise contrast to the wildflowers underneath the rows of apple trees.  Beyond the parterre, I could see the main part of the garden.  It took my breath away.

The garden, known as Frogwell, was the creation of Holly Turner and Ralph Hastings, with Holly as the driving force behind the plantings and free form beds.  Then, Holly was struck down by ALS, Lou Gehrig's disease, and Ralph was left to carry out her vision for the garden.  Their house, which was swathed in yellow Banksia roses, looked out over the garden.  The land continued to slope gently down to a meadow where sheep grazed.  On either side of the large island beds, tall native conifers (if I remember correctly, there were Douglas firs, western red cedars and possibly redwoods) outlined the garden.

I looked on-line to see if the Frogwell is still going.  There was a wedding there in 2012.  I think it was in the summer of 1999 that we did an episode for A Gardener's Diary, with Ralph Hastings taking up the narrative and explaining Holly's work.  Although I never got to meet her, one could easily see her design talent and knowledge of plants.  I came back to Atlanta thinking that this was truly one of the most beautiful gardens I'd ever seen.

Posted by Martha Smith Tate at 7:40 AM