I went overboard, she said 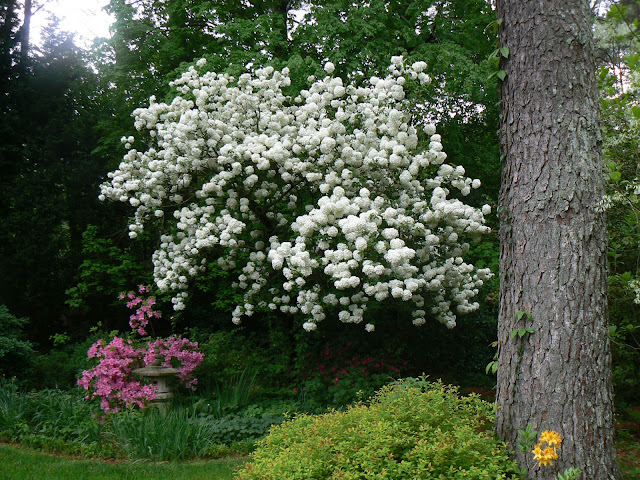 I was looking back through my posts and was sure I had used this photograph.  Maybe not.  I have featured Viburnum macrocephalum in its various stages (the latest was the lime green phase).  But here is the plant in all its glory - a mass of pure white balls.

I am - where else - in Margaret Moseley's garden.  It's mid-April.  That's a spirea in the foreground - 'Limemound' perhaps? And, you can see a twig of a native azalea (orange) in front of the tree.  The rest of that beautiful plant, which sits next to a purple smoke tree, is covered with honeysuckle-type blooms.  The azalea is not a pure species, as I remember, but it closely resembles the Florida azalea, Rhododendron austrinum.  Margaret rescued it from a farm where a family did not appreciate what they had and were about to destroy a treasure trove of native plants.

Margaret called me while ago, and I am marveling at her attitude.  The physical therapist had just left her home and had told her they were treating her as someone who has a broken back.  She can never bend over again nor do any kind of twisting motion.  She is not to pick up anything heavier than a can of soup from a countertop.   I looked in my pantry and saw that means 10 and 1/2 ounces.  She cannot do any washing and drying of clothes, which she said, she was disappointed to learn. I'm having trouble seeing this as a let-down.

Margaret will be 97 in May and says she's never had a bit of back trouble.  "I've known people who've had it all their lives, so I can live out the rest of my life with it.  I've been so lucky."

The subject quickly turned to the back yard.  "Oh, you ought to see it out there.  It's just beautiful. The Daphne odora, the 'Fragrant Pink', the 'Magnoliaeflora'.  I've even got some daffodils blooming."

I quizzed her on a camellia I was trying to identify in a photograph.  I described about ten items that were nearby.  We started laughing.  With so many plants out there, it's pretty impossible to get an identification on just one pink flower among dozens.

"You have to understand," said Margaret. "I went overboard and planted everything I could get my hands on."

So, Margaret is back to Margaret.  If it stops raining, I'm going out there tomorrow to see if I can find my mystery camellia and show it to her.  As it stands now, there's no telling if and when Margaret can get back out in the garden.  But I can tell she's happy just knowing what's out there and thankful she has had so many good years to devote to something she loves.