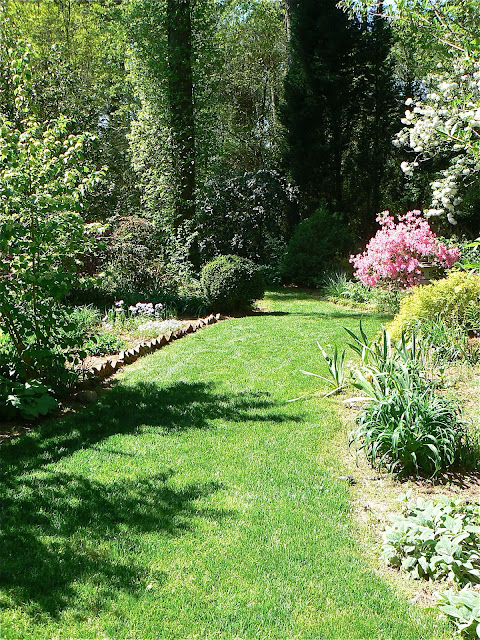 When visitors would come to Margaret Moseley's garden, it was easy to feel the magic.  You were mesmerized by the way light filtered through tall trees, and everywhere you looked was a special plant - maybe one you hadn't seen before or maybe one you were familiar with but hadn't seen used in such an intriguing setting.

But when professional photographers came, they were frustrated.  There is no overall view of the garden, which means that huge, sweeping views don't exist.  I am not a professional photographer by any stretch of the imagination (although the newspaper at one time paid a whopping $25 for a photo; that didn't last long), but I have ended up with mostly small vignettes or closeups of plants.  I can tell from the magazine articles on Margaret that real photographers had the same problem.  One newspaper photographer climbed on Margaret's roof to get an overall shot.  It was pretty good, but you could still only see a portion of the garden.

For the visitor, though, the twist and turns and pathways were fun to navigate, especially when you were making a new discovery around every corner.  But, even if you came early or late in the day (to avoid downtown Atlanta traffic, I usually was there at mid-day, the worst time for taking photographs), it was still difficult to capture the beauty and ambience of this garden.

The above photograph is of a wide path at the back of the garden.  If you were standing at the entrance to the garden, you'd have no idea this scene existed.  Without looking at the date of the photograph, I can pretty much tell this was in the first half of April.  The viburnum on the right has turned white, and the leaves on the trees still have that freshly leafed out look.  The pink azalea seems to be at its peak.  A later blooming viburnum on the left is in its green stage.

It's gray and rather cold today.   Margaret has been transferred to a rehab facility.  I haven't yet been able to track her down.  For the time being, I'm looking through photographs of her garden and thinking how much joy she has brought to so many people and what pleasure she has derived from this beautiful space.  More scenes to come.  First, to locate Margaret!