Beauty when not much is in bloom - end of April 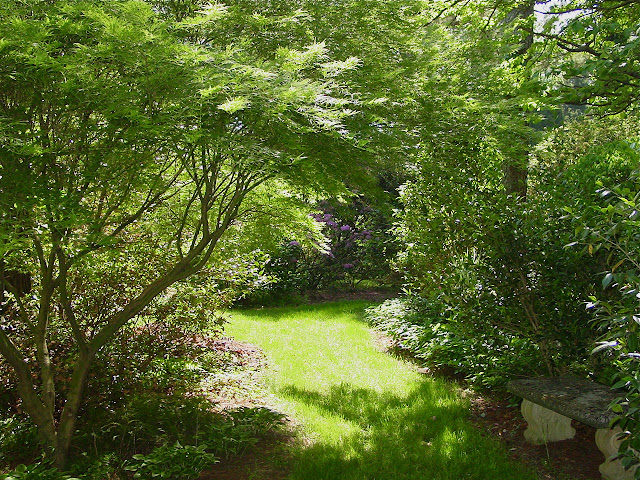 I've written about how Margaret Moseley would call me up and say that her garden was "the prettiest it's ever been."  Usually, that occurred in winter, when most people weren't even thinking about flowers.  But, due to the many camellias, hellebores and daphnes Margaret planted over the years, I would likely get this call when the weather eased up a bit during the months of January and February, and her back yard looked like a fairy land.

But, there were times when I would talk to Margaret and ask about the garden, and she would answer:  "There's not a thing out there to see," meaning that not much was in flower.  She'd quickly add, though, that "it's still pretty."  And it was.  And, usually there would be a lot more in bloom than she had let on.

In Atlanta during the growing season, roughly from late February through mid-November, there are peaks and valleys as far as flowers are concerned.  I used to be able to predict when the peak bloom times would be, but overall these dates have changed in recent years.  The peonies that once were at their best on Mother's Day, the second Sunday in May, are now at their prettiest around the first of the month.

In the above photograph, I can tell that it's probably the beginning of the fourth week of April because there is a rhododendron in bloom in the background.  And, you can sense that the special light you only find in May is starting to present itself.  Elsewhere in her garden at this time, there is a late blooming viburnum (V. plicatum), and the bearded iris, roses and poppies will soon refresh the garden with color and fragrance.

Green is my favorite color, so I'm in luck most of the year in Margaret's garden.  She has plenty of evergreens to back up the deciduous plants that are bare in winter.  I remember when she planted the Japanese maple on the left.  It was tiny for so long, and one day I realized that it had grown into a mature tree, lending more fresh green to this leafy passageway in the garden.

An update on Margaret:  It took me a few days to find her, but she is in a rehab facility near the hospital.  She's ready to go home, but it will be a while until she gets her wish.  We're due for a warming trend for the next ten days, so that means her many camellias will start blooming again and put on a show, maybe just in time for her return home.
Posted by Martha Smith Tate at 9:45 AM