Do I have the right man? 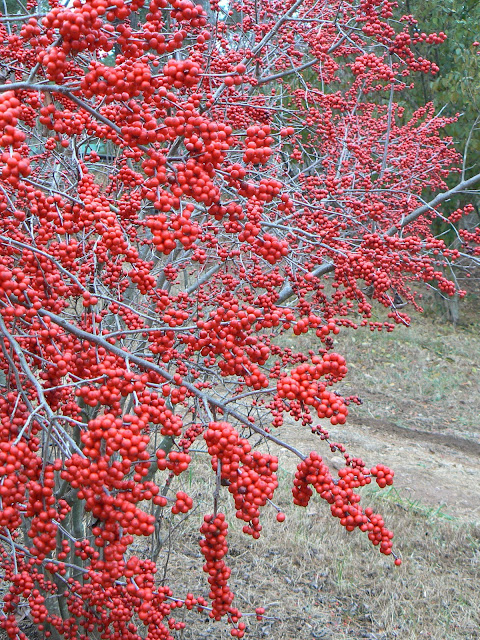 I'm not sure exactly when I bought some 'Winter Red' deciduous hollies - I think it was last December, right before the wonderful Atlanta nursery GardenHood closed for the holidays.  I also bought two 'Winter Gold' females, as well.  But, which male holly did I buy?  I think it was 'Jim Dandy'.  I do know that my initial purchase was only two red hollies and one gold.  But, I thought better of it, realizing that my dream of a holly orchard wasn't going to come to be if I didn't have more plants.  I went back and got the few remaining female hollies, but there were no more males to be had.

The plants stayed here in Atlanta for a few weeks, and then one pretty winter day, I went down to the farm and planted my "orchard."  I made three rows, and put the lone male in the center.

Later in the spring, I went to check to see if the hollies were blooming at the same time.  That would be necessary to produce a berry set.  I was shocked to find that the hollies had been dug up and moved.  They were now planted in a long row.  I think what happened is that the family who plants a garden at the farm and who have made a deer fence so that I can have some vegetables, too, thought it was inconvenient to have the plants bunched up.  It made plowing difficult.

My concern then was that it didn't rain for ages.  They had watered, but then there was a long dry spell.  I was pleased, though, to find that there were some little green berries forming on the plants.

But then, more drought.  The summer was brutal, and I noticed that the berries had all dropped off.

The other day, I screwed up my courage and checked on the hollies, expecting them all to be dead.  I was surprised to find green when I scratched on the slender branches.  As far as I can tell, they all made it through.

I have a long way to go with my tiny plants when you make a comparison with the photograph above.  These are deciduous hollies at Wilkerson Mill Gardens near my hometown of Palmetto, Georgia.  Elizabeth Dean and Gene Griffith are the owners of a marvelous specialty nursery.  In addition to a red deciduous holly orchard, they have a beautiful row of 'Winter Gold,' as well.  The berries, when they are at their peak in a good year, are just dazzling.

So, my objective is to have lots of berries to use at church and at home.  It's going to take a while, but I'd like to talk to Elizabeth and Gene in the spring to get some advice.  For sure, I need another male.   So far, in my own life, just one male has been hard to come by.  Maybe finding a 'Southern Gentleman' or another 'Jim Dandy' will be an easier task.

Posted by Martha Smith Tate at 12:17 PM No comments: