Asian ambience in an Atlanta garden 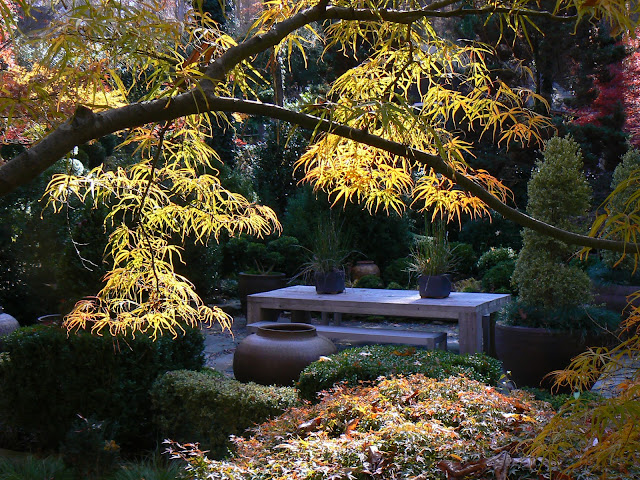 The space you see in this photograph (where the table is) used to be taken up with an elaborate, very large boxwood parterre.  It was lovely, but according to Bill Hudgins, was a lot of trouble to maintain.  The boxwoods - part of his extensive collection - had to be trimmed just so.  I never saw it any other way except for in a state of perfection, but Bill took the rectangular space, paved it over with stones and created another area for outdoor dining.

I don't know what is on his back terrace now, but it used to be very European, with a big stone table, and classical lion heads spilling water into a pool.  The scene could have easily been in France or Italy.

This table, however, which is out in the garden, definitely feels Asian.  Bill has been able to give a large part of the garden a definite Japanese feel, mostly through the use of ornaments, but also in the pruning of shrubs and trees.  There are still sections that could be in Europe, and along the stream, you could well imagine that you're in the north Georgia mountains.

I love the way the branch of the Japanese maple with its finely cut leaves is pruned to frame the scene.  It's just another example of Bill's talent, which continues to amaze.