One little plant does all that 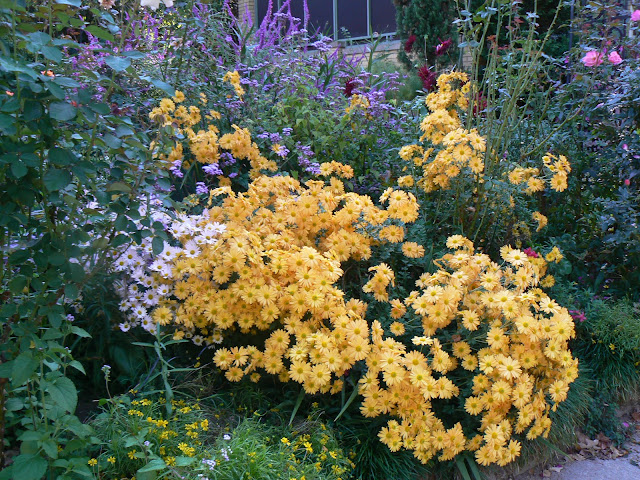 It's one of those times when you have to be there.  Try as I might, I couldn't get an angle on how big this mass of golden yellow daisy chrysanthemums was.  I guess you can look at how it's creeping up onto a rose right beside it and extending back in the other direction, as well.  And, if you could imagine that the half-hidden pink chrysanthemums on the left formed an impressive clump of their own, you might understand its impact in the border along Diana Mendes' driveway.

What makes the scene amazing is that this display came from one tiny plant, which, back in the spring, was just a small tuft of green leaves.

Diana has many different colors of daisy chrysanthemums in her Atlanta garden.  The earlier blooms, like ' Single Apricot Korean' have already faded to nearly white (they start out as light apricot - a great selection to have), but the later ones - the oranges, burgundys, reds, pinks, blush peach, bright orangy-red and pale yellow - were breathtaking and blended beautifully with the roses - red, various shades of pink, cream, orange, mauve-blue and a deep wine color.  Of course, everything is set off to great advantage by the purple Mexican sage and blue asters.

I'm not sure what damage today's brutal winds (my driveway is covered in limbs of varying sizes; this after I threw what I could into the woods to clear a path for a car early this a.m.) has done to Diana's garden, but the day I was there was calm and balmy, sort of Indian summer-like weather.  I think those days are over for this year.

I'm glad I got to see this magnificent garden on a glorious fall day.  Tonight, it's going into the 30's with big wind gusts (I know this is nothing to compare with what my sister-in-law Sallie Hodges is getting in Abingdon, Va., where it is already snowing, and what my daughter, who just called from Brooklyn, N. Y.,is about to go through.  She just called to say she was getting cabin fever and could I tell her how to play Crazy Eights.  I couldn't.  As many times as my daddy and I played this card game at the kitchen table, I'm drawing a blank, except to know that eights are wild - or are they?).

Anyway, maybe the sight of these golden chrysanthemums will bring a bit of cheer on this otherwise rather ominous day for so many people up and down the Eastern seaboard and into the Appalachians.  I know that even on such a blustery day, I'm thinking about how I could have all those chrysanthemums next year.  They'll be behind my future deer fence, of course.  It must have been fun to be Diana and step out into her front yard and see all that colorful beauty on lovely fall days.  Something to aspire to, for sure.
Posted by Martha Smith Tate at 1:53 PM No comments: