How a designer thinks, I think 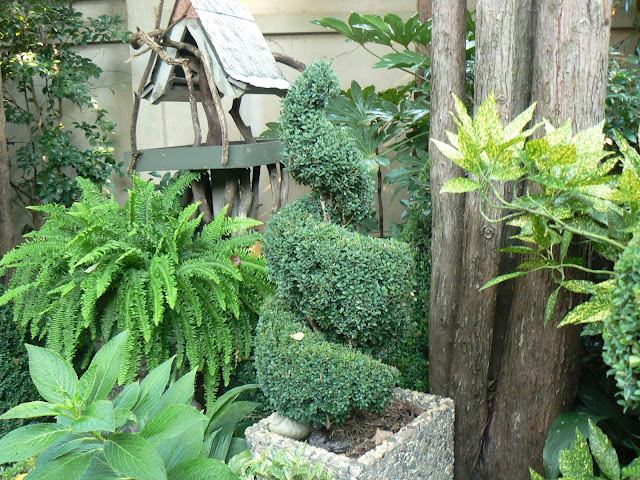 We're back in Louise Poer's garden. This photograph was taken in October year before last (or was it last year?).  Louise is a garden designer, and although I've seen some of the work she's done for others (fabulous), it's her own garden that intrigues me.  How does she come up with the things she does?

I do know that she always attends Scott's Antique Market on the second weekend of every month.  She  has come up with some great finds there.  I'm betting the rock planter with the boxwood spiral was purchased at Scott's.  I think someone made the bird feeder for her.  She might have had the twigs added to make the house more interesting.  It's sitting atop some twisted tree trunks or limbs.

Also, I wouldn't think of a Boston-type fern as something I'd want to put out in the garden like this, but it's really effective.  I don't know where she stores these in winter.  Come to think of it, maybe in the daylight basement at the farm.  Her helper spends weekends down there, and last winter the basement looked like an upscale orangerie, with great looking houseplants that had obviously summered outside.

The bark you see is a limbed up Leyland cypress.  Since this garden is small and walled in, Louise has cut all the hollies and Leylands way up to give the lower plants room to breathe.  You'll notice also, that  this is a green garden.  The only color here is the aucuba that is speckled in yellow (is it 'Gold Dust'?  Maybe.)

The different textures make this scene interesting.  In the background, you can spot the tropical looking Fatsia japonica, with its big, glossy palmate leaves.  Then, the foliage of a hydrangea is in the foreground.  If you were to stand where I was standing when I took this picture, you'd see a garden chock full of plants, most all of which are green.  Louise does add color, but it's almost like she can take you into a lovely world that doesn't depend on flashy flowers (she does have roses, hydrangeas, foxgloves, delphiniums, camellias, sasanquas and some other flowers). It's just that she mostly thinks in green, which I think is a good thing.
Posted by Martha Smith Tate at 3:30 PM No comments: