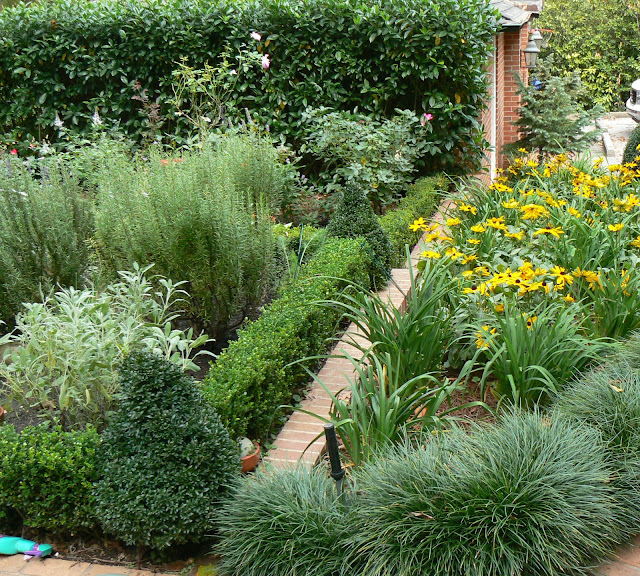 For 11 years, I went around the country (and once to Canada) to scout gardens for A Gardener's Diary on HGTV.  I loved meeting the people.  There were such interesting stories out there (our contention was that every garden, no matter its size, had a story), and every one was different.

One of my favorite episodes was shot in Pennsylvania.  I didn't scout that one, so I learned about the remarkable Joanna Reed as the show was edited and then finished.  She had a large garden, and well into her 80's was out there every day.  Visitors were welcome, and just about anytime someone would walk into her garden, they would see something wonderful - an unusual flower, an interesting shrub that might be a variation of a common plant, a small rare tree brought to her by a plant explorer.

The secret to Joanna's garden was that she was a meticulous dead header.  Every time a flower would start to fade or a leaf would turn yellow, it was snatched up and composted.  Joanna segregated the different types of garden debris into categories - weeds that needed to be totally removed in one pile, reseeding annuals in another, and so on.  The result was that her garden, though crowded, always looked good.

In the photograph above, it's early October.  The Rudbeckia 'Indian Summer' is still blooming, so no problem there.  And one thing that is usually problematic - the spent foliage on day lilies - has been taken care of.  You will notice that the day lily leaves (in the foreground) look pretty fresh.  Margaret Moseley always took the shears to her day lily foliage, cutting it back after the plants had finished blooming.  She said it had never hurt the plants, but she would get a new flush of leaves that would continue to look good until frost.

So,  go out and check your day lilies, and see if any yellow leaves remain, or if there's a tan stalk that once held flowers still standing, cut it down to the base.  Likewise, remove the brown, crinkled leaves on your clematis vine that are unsightly, and so on.  The issue is, of course, having time to do all this.  Ideally, if it's done all season long, the duties aren't so onerous.

But, I'm the last person in the world to be telling people to keep on top of things.  I can't even keep my kitchen table cleaned off for more than 24 hours.  In my dream garden world, I'd be out there like Joanna and Margaret, chopping away at unsightly leaves and faded flowers.  I do think that's the way to have a nice-looking garden during the waning days of the season.
Posted by Martha Smith Tate at 9:12 AM No comments: