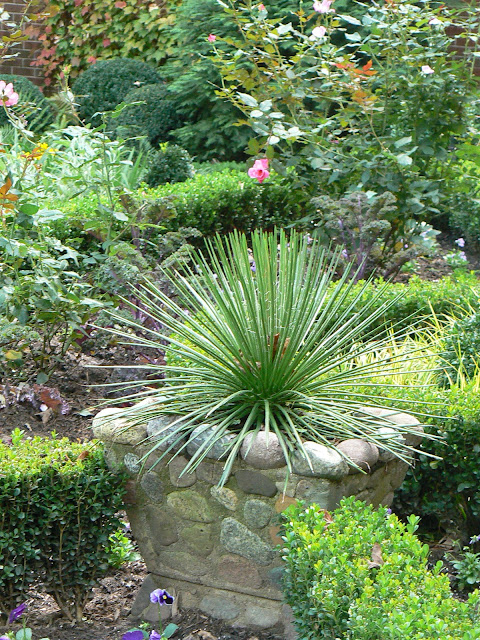 I've written before that I'm not one to "think outside the box."  In fact, when someone tells me to do that, I freeze, and my mind goes completely blank.  I think part of it is that I don't understand what they're driving at.  Or, perhaps I'm just one of those people incapable of coming up with cutting edge ideas.  That's likely the case.

But I can discern when a gardener or designer has done something extraordinary that is entirely unexpected.

A particular case I'm thinking of is represented in the above photograph.  If someone asked me to picture a container set in a garden, I would immediately conjure up an image of mixed flowers and foliage spilling over the sides of a terra cotta pot.  Never would I picture an informal rock planter as seen above.  Nor, would I think of a single architectural plant that doesn't resemble anything else in the immediate surroundings in terms of texture.

Yet this structural plant (perhaps an Agave geminiflora or something similar) catches the light in this early fall garden in Atlanta.  Other matching planters have been placed as the connector, or centerpiece, of intersecting lines of clipped dwarf boxwood in a repeated "X" pattern.  Never in a million years would I have thought of such a design, but the prickly plants stand out in contrast to the other foliage, and the effect is eye-catching.

In this particular garden, summer plants have largely been pulled up, and winter flowers just planted.  You can see a pansy (maybe a viola - hard to tell) right at the base of the container.  Still, the day I was there, a few zinnias and rudbeckias were still looking good, as were some roses.

I'm not sure how hardy the container plant is, whether it will last through the winter or not.  I suspect it had been there for a while and that the owner gotten her money's worth.  I do have a photograph that shows the whole area, but from that angle, you don't quite understand the impact of the prickly sprays of green in rustic pots in such a formal design.  It's definitely a combination that's"outside the box", but quite an effective one, to say the least.


Posted by Martha Smith Tate at 8:38 AM No comments: