Clematis expert to the rescue 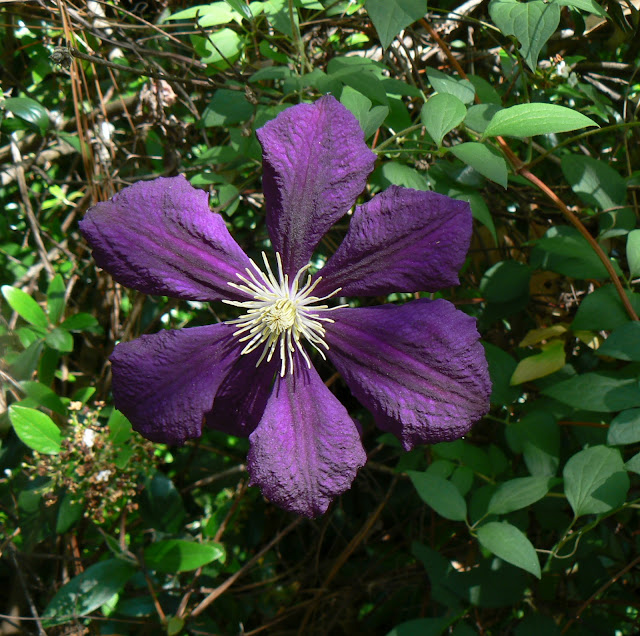 I had no idea what to do.  On July 9, 2012, I opened up my blog to write a post.  A sign from GoDaddy.com came up, really an advertisement, to buy a domain name.  No matter what I did, I couldn't get rid of that window.

Finally, I called GoDaddy (thank goodness they have a phone number, unlike Google), and they told me that my domain name, www.gardenphotooftheday.com, had been auctioned off because it had not been renewed.  Someone else had bought my Web site.

"You can call the person and see if they will sell it to you," they said.  "That's about all you can do."

I pictured some person with a bandana and gun holding the domain name for ransom.  "You can have it for a thousand dollars," I imagined them saying.

I didn't even try that.  I thrashed around the house, then sat down to see what had happened.  My daughter had started this blog for me last June, after I'd paid another company over sixty dollars and wasted six months to find out their templates didn't work with an Apple computer.  My daughter had the site up and running within 15 minutes.  We bought the domain name for $10.99, and she showed me how to write posts and do the photographs, and I was good to go.  It all went very well, and every day I relished looking at pictures and writing some (usually rambling) text.   It was so much freer than writing for the newspaper, and I was having a ball.

Then, came that fateful day.  My domain name was gone.  The next day someone had put up a picture of a Japanese garden where my photographs used to be.  There were cute ladybugs and bubbles on the borders.  None of my followers knew what had happened.  There was no way to explain, except to the few people who had my regular e-mail.

What happened could have so easily been avoided.  I had seen a charge on my American Express bill for GoDaddy.com and assumed that was my renewal.  It was not. My daughter also has a blog, and it was her renewal.  I looked at my gmail e-mail and saw the notice:  The name would be sold if I didn't renew by July 8, 2012.  That notice was sent on May 16th to an account I never checked.  GoDaddy didn't have my regular e-mail listed.

I won't go into the paroxysms of regret I experienced.  Every day, I would beat myself over the head.  I didn't know what to do.  Finally, when my daughter came home from law school, she set me up with a new domain name and rescued my archives.  But, the followers who had been there were gone, and she couldn't fix that part.

One day recently, Lyndy Broder, who knew what happened, e-mailed to say her daughter Mia, who is a computer whiz,  might be able to help me.  And she did!  It took a little experimenting (I was no help; I had some passwords written down, but not the ones she needed), but, if you were a follower and couldn't sign back up, you now receive the e-mails again.  Hooray for Mia!

I had taken the rest of July off, wringing my hands over what to do.  I started writing again in August, hoping something would catch on.  I would have only five page viewers in a day where I used to have hundreds.  I kept plugging along, though, and was happy one day when I had 13 hits.

But, we're back in business now.  That's Lyndy's clematis above.  She has hundreds of varieties in her expansive garden in Stockbridge and travels all over the world to visit clematis hybridizers.

I love this clematis (I also loved every single one she has).  This is C. viticella 'Blue Belle', originally raised by the famous hybridizer Ernest Markham, head gardener of Gravetye Manor in England.  My clematis book says it was temporarily lost to cultivation, but was re-introduced by Raymond Evison of Guernsey Clematis Nursery in the 1980's from a clone found in Canada.  That was a close call, sort of like my blog, but much more serious.

So, thank you, Lyndy and Mia, for getting me back on track.  Thanks to all of you for your patience, and I'm so sorry about what happened.  It's no fun falling off the face of the earth!