Carol's retribution - did the punishment fit the crime? 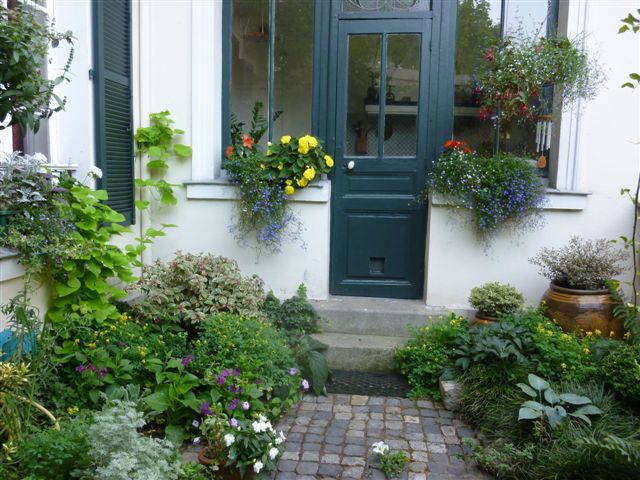 Back in June, my long-time friend Carol Tessier (originally from South Africa) and her French husband Luc had three of us for dinner in their garden.  We had hors-d'oeuvres out on the lawn, surrounded by Carol's miraculous garden.  We then moved into the conservatory for dinner, as it was a bit cool still.  Summer was late coming to Paris this year.

Anyway, Carol was to fetch (a word she would use, but I wouldn't) the three of us - my older daughter Anne, my beloved childhood friend Linda and me - at the end of the Metro line.  For some reason, Carol and I start laughing the moment we see each other.  This time, I was all apologies.  We had forgotten the bottle of wine we'd bought to give them.  We were early, so I dispatched Anne to buy another.  The catch was that we were in a very unlikely spot to find any sort of store, surrounded by high rise apartments and office buildings as we were.  Anne had gone dutifully off in the direction that looked the least deserted.

Carol arrived, and we waited and waited.  No Anne.  It seemed like an eternity.  I was worried.  Had she gotten lost? These streets all looked alike.  But finally Anne came running up, totally out of breath, wine bottle in hand.  Amazingly, she'd found a Monoprix (sort of an abbreviated WalMart), but the line had been long.

We were laughing at our folly as Carol drove over the Seine and pointed to some flower-filled boxes on the bridge. "They always have very beautiful hanging baskets,"she explained.  "Last autumn, I decided to help myself to some slips.  When I was taking the cuttings, a bee stung me really hard and said, 'Good for you; one doesn't do that sort of thing!"

When we got to her house, she showed me the tiny courtyard outside her kitchen where the purloined cuttings had just been put in.  Not much was going yet.  However,  I just recently received the above photo with Carol's observations:

"I thought you might like to see what our kitchen courtyard and window boxes are looking like. Most of the plants seeded themselves including the petunia bravely coming up between two paving stones. The lobelia seeded from last year and the purple tobacco as well.  What amuses me is the large white tobacco coming up in the window box; heaven knows how the seed got there. Otherwise all the other plants came from slips that I took last autumn on the Pont de Courbevoie over the Seine."
It was hard to choose from the three photographs Carol sent.  That yellow begonia and the trailing blue lobelia in the box on the left are great seen up close.  And this view doesn't show the mysterious white tobacco that came from who knows where.  But from the looks of the courtyard I'm thinking that crime did pay, after all.  But perhaps Carol should consider wearing some thick gloves this fall if she decides to be a repeat offender.