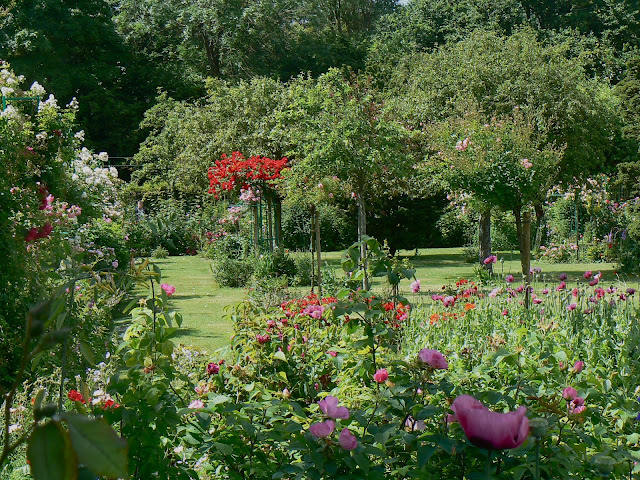 I think I've mentioned before that I live in the woods in the City of Atlanta.  My lot is one that was broken off in the 1940's from a stone lodge that belonged to a governor of Georgia who used it as a retreat in the late 19th century.  Where I am - close to the Chattahoochee River - was once considered the country.  The roads weren't paved until probably the 1940s or early 50's, and there weren't many houses.  Actually, one cottage that the across-the-street neighbors just tore down was pre-Civil War.  I have to wonder what they were thinking to destroy something so historic that could have been charming if they'd fixed it up instead.

Anyway, when I moved here in August 1973, we lived in a 1926 cottage that had once belonged to the lodge.  The house was one fifth of a mile from the street.  It was also smack in the middle of a forest, with two large oak trees casting shade almost all day long.  From the cottage you couldn't see any civilization, even in winter.  It was totally isolated.

Needless to say, there was not enough sun to grow grass, although year after year, my husband would throw out fescue seed, thinking somehow we could have a patch of lawn.  Nothing ever took, except for the moss that would keep cropping back up.

I think it's important when you have a garden to include some negative space (I think that's the term landscape designers use, with plantings like shrubs, trees and flowers being the positive space, and lawn being negative space).  If you have a yard thick with trees, right up to the doors and windows, you get claustrophobic.  At least I did.  I longed for even a tiny patch of grass to relieve the forest.

The photograph above, taken at Giverny, France, has a nice balance of lawn and trees and flowers.  There's something soothing about the grass.  I took over 300 photos in Monet's garden and in the village of Giverny, and it was this one I kept coming back to.  The part of the garden near Monet's house is so jam-packed with flowers (not to mention people), your eye seeks some relief.  Just this amount of grass serves to calm this part of the garden, a welcome respite from the hoards of people and the thickly planted, though impressive, flowers.

Posted by Martha Smith Tate at 4:36 PM No comments: