Know your lotus terms before writing them in stone 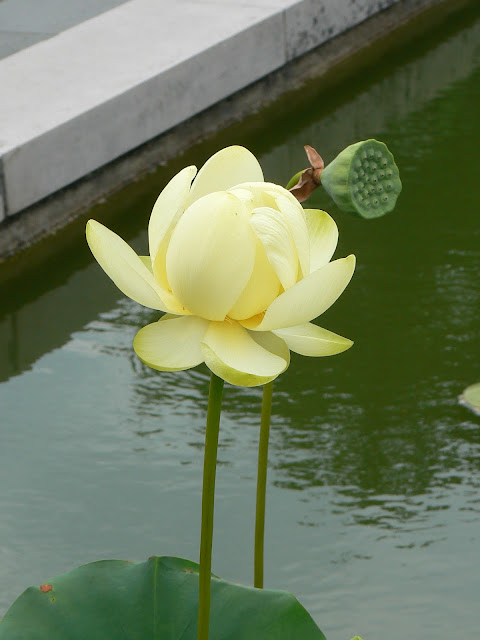 I knew what I had done the moment the phone rang early on a Thursday morning.  I looked down at the Caller ID.  Sure enough, it was Don Jacobs, an erudite plantsman, explorer, collector, hybridizer and owner of a small specialty nursery in Decatur, Georgia.  He never called me unless I had made a mistake in my column in the Atlanta Journal & Constitution.

"You've misused the word 'peltate,'" he said gruffly (he had that kind of voice that sounds scarier than he really is).

I was writing about some lotus plants I'd seen in a swimming-pool-turned-garden-pond at a friend's home.  I remarked on the exquisite, perfectly-formed flowers and the gorgeous "peltate" leaves.

I'd gone out on a limb on that one.  I can't remember why I knew the word "peltate" or why I thought it was the best description for how lotus leaves are attached to their stems.

Here's the definition, as found in a Web dictionary: " (of a leaf) more or less circular, with the stalk attached at a point on the underside."  I had carefully examined the slide I had of lotuses at the Monastery of the Holy Spirit in Conyers, Georgia.  I determined that those were indeed peltate leaves.

Wrong.  Don then went on to explain that peltate actually meant having the petiole attached inside the margin and that the term usually referred to a shield-shaped leaf, whatever that all means.  I was standing ready for a deluge of humiliating phone calls pointing out my mistake.  No one else ever said a word.

So, I offer this photograph of a lotus flower, with a bit of pain and embarrassment at the thought of making such an error.  I took this at the Brooklyn Botanic Garden in New York.  You can't see much of the leaf - peltate or not.  The flower and accompanying pod were pretty spectacular, though.


Posted by Martha Smith Tate at 4:26 PM No comments: