In the box or out? 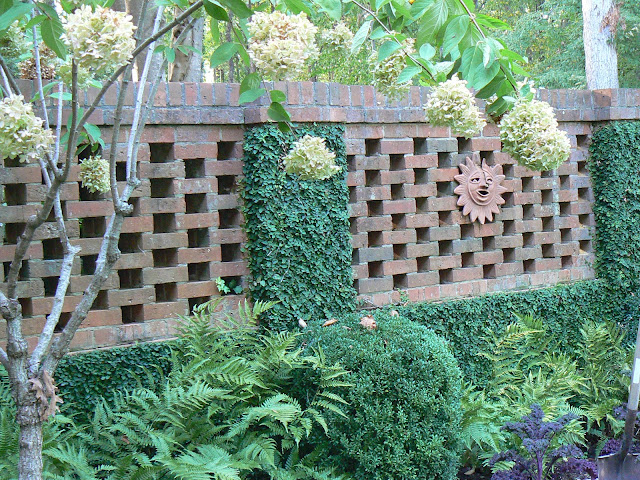 I have a confession to make.  Whenever someone tells me to "think outside the box," I go totally blank.  I can't even imagine what they have in mind, much less come up with a single idea of my own.

But, when it comes to a garden, I can actually tell when someone does think out of the ordinary.  I'm always in awe of people who have ideas I would never have thought of in a million years.

It used to be that I could tell when a certain very successful landscape firm had been to a property.  The now-retired head of the firm had a formula, and for every house it was the same.  A weeping yaupon or a crape myrtle would rise up from a large bed of liriope near the front door.  There were other markers as well, including the use of certain shrubs that, to my mind, had a commercial look. This guy definitely did not think outside any box.  In fact, his design was so recognizable that some of us would proclaim the landcape "________-ed" (name withheld).  Regardless of the lack of imagination, he made a fortune with his formulaic design.

On the other hand, we would extol the landscapes of designer Ryan Gainey.  He also had a certain recognizable look, but it happened to be much more attractive in my view.  We would visit one of his gardens and proclaim it "Ryanized."  This was a compliment.  Ryan would often think outside the box, though, with some very original combinations of both plants and hardscapes that would boggle the mind.

The garden in this photograph was designed in conjunction with the owner by Louise Poer.  She's another person who thinks outside the box, in a good way.  I often marvel at what she comes up with.  She is very skilled at making a garden look good, even at off times like the months of August and September.  Here, she has used evergreen fig vine (well, evergreen if it stays above 14 degrees F.) to  soften a pierced brick wall.  A peegee hydrangea has been limbed up to allow plantings of autumn fern, boxwood and seasonal annuals underneath.

I bought a card with a New Yorker cartoon on the front.  There's a drawing of a man in a business suit looking down at a cat, who's looking up at him.  You see a litter box in the background.  The man is saying, "Never, ever, think outside the box." I admire gardeners and garden designers who are able to come up with concepts out of the ordinary and are able to make them into reality.  It's a real talent.