Something different, but maybe not 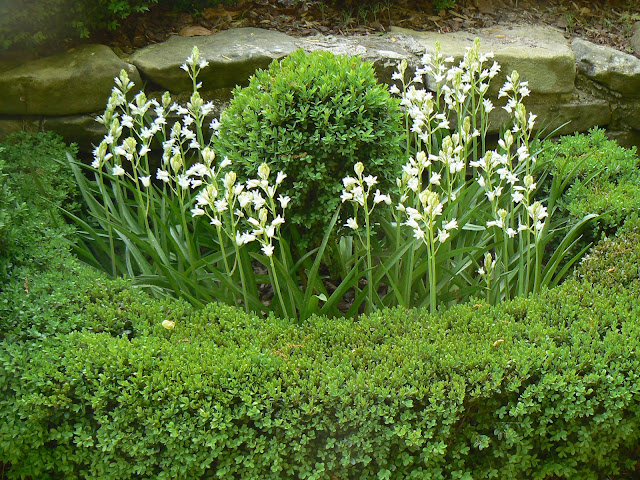 This happened a long time ago, but some acquaintances had me over to get my take on the area next to their front door.  A walkway led from the driveway to the entrance.  Up next to the house was a stone wall that formed a long rectangle, with the stone stacked higher in back and lower in front along the sidewalk.

The couple asked what I would do.  At that point, there were some scraggly, overgrown azaleas in the space.  I mentioned that it seemed a shame that the azaleas only flowered for two weeks out of the year, that maybe they should think about something else for this prominent place.  I proposed taking the shrubs out and defining the area with dwarf boxwoods that would surround a blank space which could change with the seasons.  I suggested bulbs for spring, annuals for the summer and fall and violas for the winter.

I could tell immediately that they weren't willing to let go of the azaleas.  I went back a couple of years later, and there was that potentially attractive space, looking about the same.  It just seemed a shame, because something on the order of the above arrangement would have worked nicely and would have kept the area around the front door from looking so scruffy.  It was obvious they thought my proposal was too formal for their tastes.  Of course, I reasoned that since the front yard was very informal (and had lots of azaleas) that just this one little place of structure would have been a welcome contrast.

The above scene is just one of hundreds of vignettes in Bill Hudgins' Atlanta garden.  He has many, many informal areas, but he also has some very defined spaces.  In this case, he's planted white Spanish bluebells (Scilla hispanica) for spring.  Later, he filled in with white impatiens.

There are very few instances where I can look at a space and envision from scratch what to do.  I know something's good when I see it, I just can't invent it.  I certainly wasn't offended that the couple didn't follow my suggestion, but I still think something on the order of Bill's design above would have looked great next to their rambling, clapboard cottage.


Posted by Martha Smith Tate at 8:45 AM No comments: