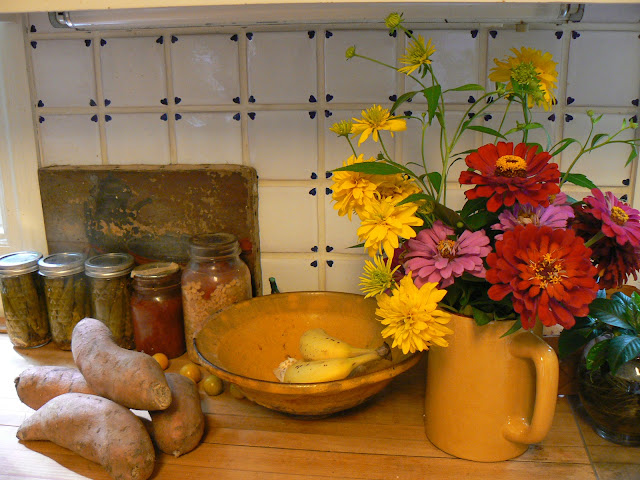 I picked prettier zinnias at the farm last Saturday, but I was in a rush when I took this (oops, blurry) photograph.  Thus,  the best ones are on the other side or in another vase.  If you've grown zinnias, you know how astounding a single flower can be.  In fact, a close-up I took of one zinnia in the long border where my Mother grew summer flowers was so perfectly exquisite in color and form that it didn't even look real.

But the point here today is that the yellow flowers that provided my parents with a butterfly show outside the kitchen window every summer are alive and well.  Mother had these for as long as I can remember.  She would pick bouquets in July and August that would include the most incredible zinnias and these yellow flowers.  It was not until 1994 that I learned that they are a type of rudbeckia.  I would have guessed a helianthus of some sort.

The only other time I've seen this flower was in an early episode of A Gardener's Diary that featured Susan Felts' country garden near Nashville, Tennessee.  Susan and host Erica Glasener stopped and talked about the big splash of yellow flowers rising from large clumps of foliage.  Susan identified the flower - the exact one Mother had - as a rudbeckia.  Susan named the species, but I've long forgotten.

As I said before, I wish I had made notes about where Mother got her flowers.  The zinnias came back year after year, as did the orange cosmos.  I know the providence of her peonies and the pink daisy chrysanthemums (now gone, with another similar one in its place), but I don't know about this rudbeckia. This flower, although it grows on tall slender stems that branch out, is pretty tough.  I picked the zinnias you see here and the rudbeckia on Saturday afternoon.  I didn't have a container in the car, so I just lay them on the seat and proceeded to visit an elderly friend for a couple of hours.

When I got home, everything was limp.  Very, very limp.  I re-cut all the stems and stuck them in water.  On Monday I decided to take this picture to see if I could get a positive i.d. on the rudbeckia.  Although I wish I'd taken time to arrange better, the flowers themselves have held up really well and still look good today.

Flowers are a great way to connect to the past.  I love remembering how it was to sit at my mother's kitchen table with the flowers and the fresh vegetables and look out the window at the butterflies darting from one colorful bloom to the next.  Those are good summer memories.
Posted by Martha Smith Tate at 8:08 AM 1 comment: