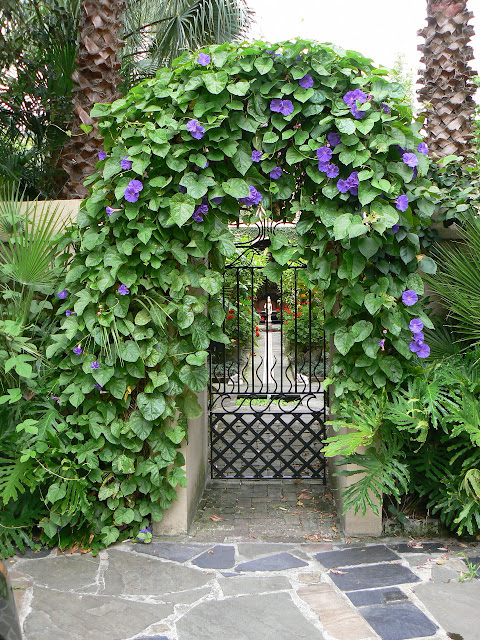 Morning glories were the bane of my parents' existence.  Well, maybe privet was, but during the summer, when their huge vegetable gardens took up most of their spare time, there were continuous complaints about morning glories.

The plants came up everywhere, all along the fences and particularly in the pole beans.  If you didn't get them as they came up, it was a losing battle.

When I got married, my mother-in-law gave me a packet of 'Heavenly Blue' morning glories.  I don't think I started them soon enough, because they didn't bloom until well into fall.  I would plant them in a container on the back stoop.  They were very blue and very heavenly.

It's been years since I've thought of growing them.  When I was in Charleston one year, I saw the above arch covered in blue morning glories.  Someone had planted these early because it was just before the Fourth of July when I snapped this photo.

I have a picture of some lovely blue morning glories backlit by the sun.  It was taken in Diana Mendes' Atlanta garden in late October.  Diana has them on her entrance arch, which in spring, is dominated by cobalt blue, bell-shaped clematis.

I noticed on one Web site, morning glory is called "bindweed."  Mother and Daddy would have agreed with that descriptive name.  But, I do remember some pretty white ones my grandmother grew, so they weren't all bad.  Used in the correct way, the larger flowering ones are worth growing, especially the 'Heavenly Blue' ones.
Posted by Martha Smith Tate at 5:51 PM No comments: