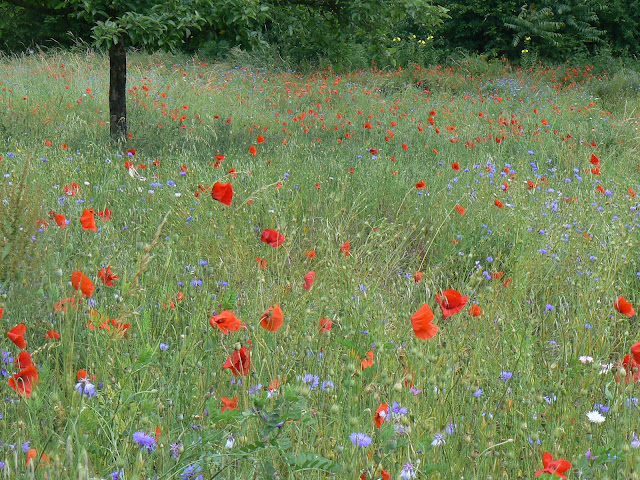 Here's the difference between a true photographer and me.  I'm actually referring to my friend from childhood who takes photography lessons and has won awards.

She and I went to France for the last 10 days in June.  She had a zillion dollar camera with her - one that she had just purchased and which weighed I don't know how many pounds.  She wouldn't tell me, but I know it weighed more than my second child when she was born.  The lens alone looked to be burdensomely heavy, judging by its size and protrusion.  The camera was too large for a case, but she carried it everywhere, gripping it tightly to her chest.  Other photographers-in-the-know would stop her to admire the professional looking apparatus.

On our second day in France, we went by train to Vernon and took the city bus to Giverny.  I've never seen so many people.  After we toured Monet's garden, we had lunch in the village (great gazpacho) and then walked up to the end to see the church and graveyard.  I think it was on the way (or was it past the church?) that we came across this field.  Some children were sitting on the grass with their sketch pads, each drawing or painting the above scene.

My friend with the complicated camera was ecstatic.  She explained that she would never take a photograph of just the field. "It's much more interesting to see the children in context," she said.  "Otherwise, you have a boring photograph with no personality."

So, I surreptitiously took my camera and avoided every child, while my friend asked the supervising adults if she could take close-ups of the children's work with the field beyond.

I never saw the results from the "real" camera.  My friend was careful to carry several memory sticks, as her camera was set on an exceptionally high format, and she could only get a few pictures at a time.  I know the results must have been good, because she had so meticulously lined the scenes up, making sure each frame was perfect before she snapped.

Meanwhile, I came home with the above photograph, which sort of conjures up Monet's Poppies at Argenteuil (he had a woman and a child in his painting, so my friend must have been right).

What I saw in this picture was a scattering of Papaver rhoeas (red Flanders Field poppy) and the blue cornflower Centaurea cyanus.  The field makes you think of Monet and the Impressionists, for sure.  It also made me think of Ruth Mitchell in Orchard Hill, Georgia, who in her heyday planted a garden with thousands of poppies and cornflowers.

Which reminds me.  Although it's hard to think of planting anything in this heat and humidity, it won't be long until the ground should be prepared if you live in the southeastern United States and want to emulate the above scene.  These cool season annuals need to planted on bare ground in the fall.  We call them wildflowers, even though they are not native to the U.S., but to Europe.  There's a field near the farm in Chattahoochee Hills, Ga., where the blue cornflowers have naturalized.  Every April, a blue haze appears at the top of the rolling meadow.

But back to this photograph.  If I had one of those apps that turn photographs into paintings, I might have something here.  But I probably should have included the children.  Maybe I'll do that someday if I return to Giverny.
Posted by Martha Smith Tate at 1:16 PM No comments: