A canal would help 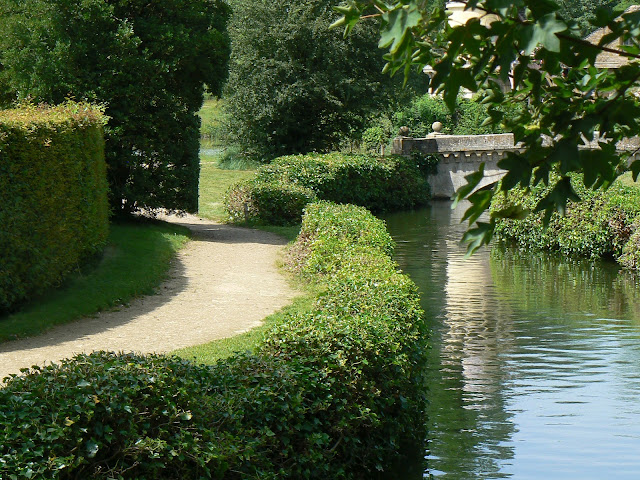 I'm back in France (not really, but just in this photograph), specifically at Marie Antionette's hamlet at Versailles.  I am a sucker for sandy paths and green clipped hedges (oops, I see a couple of brown edges there on the right; the red on the higher hedge on the left is just new growth on the hornbeams).  That may explain why I like France.  They are keen on gravel paths and must spend a lot of time trimming hedges.  I like the lines of the hedges because they make everything else look good.  I'm not a fan of the formal gardens you look out on from the back of Versailles, but I do like the structure hedges provide.  I think this may due to some deep psychological need for order that I have.

Anyway, it is in the high 90's here in Atlanta, so I guess we're luckier than some of the other U.S. locations.  Thus, I decided to put up another picture with water.  I think this must be a canal going through the hamlet.  In another part, nearer the Petit Trianon, I took a picture of a swan floating about, but the surroundings weren't as green.

I would sure like a canal in my back yard.  There used to be a stream that flowed down from the hill above the house.  As a result, I had a ton of cardinal flowers (Lobelia cardinalis) that popped up every year and bloomed in the month of August.  There are still a couple of plants, but nothing like there used to be.  I also had Louisiana iris that grew at the edges of the creek (I planted those; the cardinal flowers were native to the spot).  One year, my husband was able to get water cress to grow.  That venture wasn't ultimately successful, despite the fact that he brought plants yearly from my mother-in-law's house in Virginia and kept trying to get them established.

Now, atop the hill where there used to be an old stone lodge, there is a 20,000 square foot house.  Not a drop of water ever comes down anymore, even when it rains a lot.  For whatever reason, that stream is no more.

The more I think about it, there also used to be a perennial wet spot in the lower lawn (now all weeds that are kept low). I had once thought I could make a little channel with iris on either side.  That damp place has been gone so long that I'd forgotten all about it.

I do have the perfect place for a canal, if the stream would ever come back again.  For the time being, though, the best I can do is gaze at the water in peaceful scenes like the one above.

Posted by Martha Smith Tate at 2:34 PM No comments: