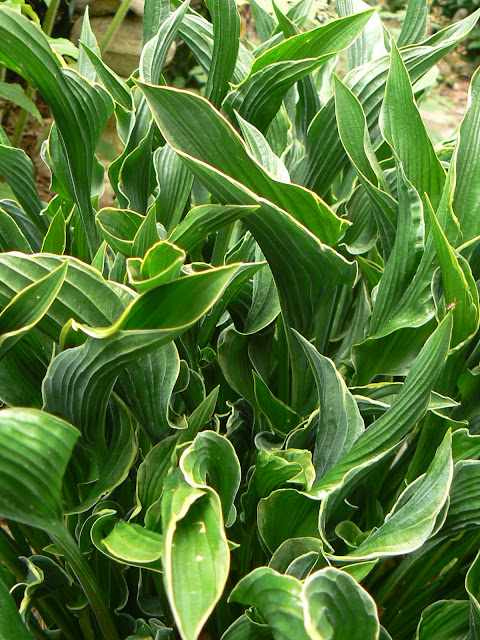 I started this post earlier using another photograph.  It showed a hosta with a large lime-colored center with dark edges.  It was a lovely plant, beautifully filled out.  Up in the corner was the above oddity.  This is Hosta 'Praying Hands'.  What I wanted to show was that this interesting hosta looks great next to a cultivar with wide, spreading leaves.

But, there wasn't enough of 'Praying Hands' in the photograph to make my point.  It may not be possible to see from this view that this hosta grows very upright.  The leaves are heavily corrugated (you can see that in this photograph), have yellow splotches and yellow to cream-colored margins.  The long, narrow leaves are tightly curled and remain that way.  Thinking of Albrecht Durer's famous drawing, I can see how the hybridizer, Gerald Williams, came up with the name.  It is, indeed, a curious looking plant, but one that looks great next to a "regular" hosta.

'Praying Hands' was introduced in 1996 and was named the 2011 Hosta of the Year.  It grows to about 14 inches tall and will form an 18-inch wide clump up north (less in a more southern climate, but still respectable).

I watched a YouTube video of a nurserywoman telling about the hosta, and she made an interesting suggestion.  She said that this is a good plant to honor someone or to put in a memorial garden.  I doubt many of us have the latter, but I like the idea of a plant with special meaning.  However,  just from an aesthetic point of view, 'Praying Hands' will look good with most hostas and would blend well with ferns and other shade-loving plants.  It's definitely a hosta to consider, even though it looks decidedly unhosta-like.
Posted by Martha Smith Tate at 2:17 PM No comments: