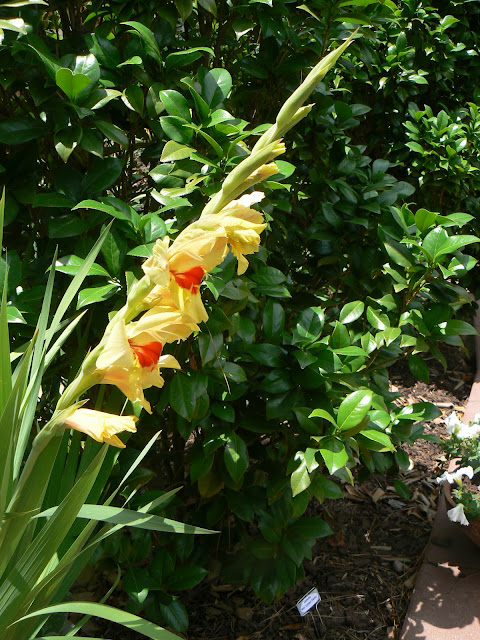 On the American Hydrangea Society's tour last Saturday, I saw this gladiolus in several places around Carol Williams' garden.  Due to the size and coloring, I thought she had bought some corms and planted them around the edges of the driveway.  I commented on the flowers, and she told me that no, they were hardy glads that come back every year.  The flowers are very special to her, she said, because they were given to her by Carolyn Bryant, a friend who died of cancer.

"She died three years ago after a seven year struggle with breast cancer," says Carol.

The two were golfing friends initially.  They went on to form a monthly bridge club that has met consistently for 14 years.

Carol and Carolyn also discovered that they both loved plants and would visit back and forth to see what each other had going.  About eight years ago, Carolyn brought over some corms.

"I don't know where she got them, but they are perfectly hardy," says Carol.  "They form big clumps really fast.  I've given tons and tons of them away."

Carol says the plants are so robust that she never knows where they'll pop up.  Three years ago, her driveway had to be completely moved and redone.  The next year, the glads came up in odd places.

"I didn't plant them.  They must have broken off when the work was being done."

What amazes Carol is that the flowers, which she says are not planted very deeply, have withstood some very low temperatures, but always came roaring back the next year.  She has never bothered to dig and store them over winter.

"It's amazing how fast they multiply.  I gave buckets of them away this spring."

The flowers are as tall as annual glads and are a cheerful yellow blotched with an orangy-red.

"They are so special to me," she says.  "Carolyn was such a good friend. I will always have such an affection for her in my heart."