What to do with Mama's hydrangea 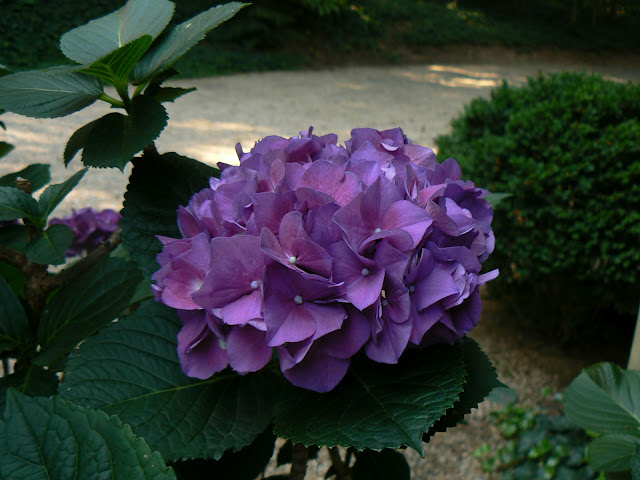 Penny McHenry, founder of the American Hydrangea Society, used to tell a story about how unreliable bloom color could be.

For years, she had passed by a house with an extremely dark bluish purple hydrangea that she described as a "jewel tone", it was so rich in color.  Finally, she stopped and asked if she could layer the hydrangea, meaning she would take a branch, bend it to the ground and make a scrape on the stem.  She would then make an indention in the soil, put the branch down where it had been scarred, cover it with dirt and put a brick on top.  Within a few months, she would have a rooted hydrangea.  She would cut the new plant from the original, dig up its root and existing stem and re-plant it.

Well, Penny got permission from the homeowner to layer this special hydrangea.  The months passed, she went back, got the new plant and brought it to her house.  The next year, she could hardly wait to have this wonderful new color in her garden.  Only, it wasn't.  As I recall, the blooms turned out to be  a nondescript light mauve.  Hydrangeas will make a fool out of you every time, Penny would say.

As to the flower above, I'm in a dilemma about what to do.  This was my mother's hydrangea.  It grew in the worst possible place at my parents' house at the farm.  It was planted against white brick, facing south and west, with no shade anywhere in the vicinity.  But, year after year, it soldiered on, putting out the darkest, richest purple blooms that would look dead in the afternoon only to be fresh and colorful by the next morning.  It was hurt in the Easter freeze of 2007 and hadn't looked all that great since then. I had told this guy who keeps vegetable gardens at the farm that I would like to move it one of these days.  I never thought anymore about it.

One day, back in February, I drove up to my house to find a giant plastic pot with a bunch of sticks coming out at the top.  What on earth?

I got out of the car and went over to the plant and realized it was a hydrangea.  I knew it had to be this guy, who also works for a garden designer here in Atlanta.  No one else would have the strength and help to move such a large container.  I figured he must have had this left over from a job and had brought it to me.

When he dropped by one day, I asked what hydrangea this was, thinking it must have come from an important client.  I couldn't even budge the container, which was filled with black soil.

"It's your mother's," he answered with a big smile.  I could scarcely believe it.  They must have dug halfway to China to get all the roots.  He asked where I wanted it planted.  I had no idea, and I also remembered Penny's story.  If it were put in the ground, would the pretty purple color be lost?

I didn't want to take a chance, so the plant has stayed in the giant plastic pot, where it has made a great comeback.  I can't get my camera to register the dark purple color, but the grape hue above is pretty enough.

I never asked my mother where she got the hydrangea.  It was either a cutting from a friend or a florist hydrangea she planted in the ground, probably the latter.  It always had a compact habit and never grew all that big.  It got no fertilizer and no care, although Mother regularly used cow manure on her plot outside the kitchen.

So, what should I do?  I don't know if they even make pots big enough to put this in.  And, if it were planted in the ground, would the color change?  My husband's favorite color was purple, and he always admired this hydrangea.  Every year Mother would cut some blooms for him.  After he died, I took some of the flowers up to the cemetery in Tate, Georgia.

The man who dug the hydrangea suggested planting it where it is.  I don't think I want to chance that.  Maybe I can come up with the design of a box to go around the plastic pot.  It could be painted dark green, which would go well with the purple blooms and healthy green foliage.  But would it be too vulnerable if we had extremely cold temperatures in winter?

Right now, the blooms are such a pretty color, and every time I go outside, all kinds of wonderful memories come flooding back.  For the time being, I think I'll just enjoy it where it is and decide what to do later.