An orchard again some day 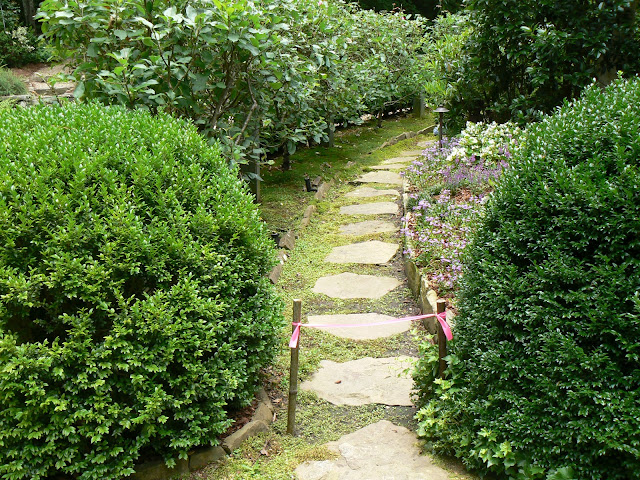 When I was growing up, we lived on either five (or was it six?) acres in the small town of Palmetto, Georgia.  Our house had been built before the Civil War, allegedly in 1852.  Mother always said the bricks had been made in the front yard.  I don't know if that's true, but when I became an adult, I discovered a memoir that had been written by the woman who lived in our house before my parents bought it in 1941.  Her father, a lawyer, died young, and when she was twelve years old, her mother had to move back to Atlanta to go to work, as the family had lost everything during the Depression.

She wrote:  "Our house was built of hand-packed brick; the paneled doors and woodwork were solid walnut; the doorknobs were white china.  The inside brick walls were sixteen inches thick, covered with white plaster, their foundations several feet below ground.  In 1905 my grandparents had bought the house from a doctor and added a dining room and kitchen of weatherboard."

In the future, I'll tell more about this woman and about the gardens of her homeplace, which was also mine.  After some searching, I found her in Atlanta, in my same Zip Code.  She sold me some of her books.  Now, I wish I'd bought every one, as I've lent them out over the years.  I only have one copy left.

But, what does this have to do with the above picture?  I took this photograph on a garden tour a few years ago.  I don't know the owners, but this is a wonderful garden, with paths to roam through the woods, a big, flat lawn for touch football, a vegetable garden and (above) an orchard.

As you can see, this area was roped off for the tour, but it looked very inviting.  My daddy planted an apple orchard at our homeplace.   There was no intriguing path like the one above, but the trees were in rows, and in the spring, little bluets came up in the grass.  You reached the orchard by way of a path between my mother's rose garden and an impenetrable hedge of super thorny Cherokee roses that surrounded our clotheslines.  I really preferred the golden delicious tree that was in the vegetable garden, which had been laid out and planted by the former owners.  But, I also liked the red June apples Daddy planted, whatever they were.  Most of the other trees were "horse" apples that mother dried and made fried pies from during the winter.  In late summer, though, she would make fresh apple cobbler, which made our kitchen smell so good.

Anyway, I'd love to have an apple orchard again.  I like the one pictured above, and I am bowled over by the idea of a walled "ancient"orchard that garden designer, author and popular blogger Tara Dillard did for a client.  But, I'd be satisfied with a simple one like Daddy's, where the thrill of picking the apples and plunking them in a big basket to take to Mother lingers in my memory as if it were yesterday.