Let the seeds fall where they may - or not 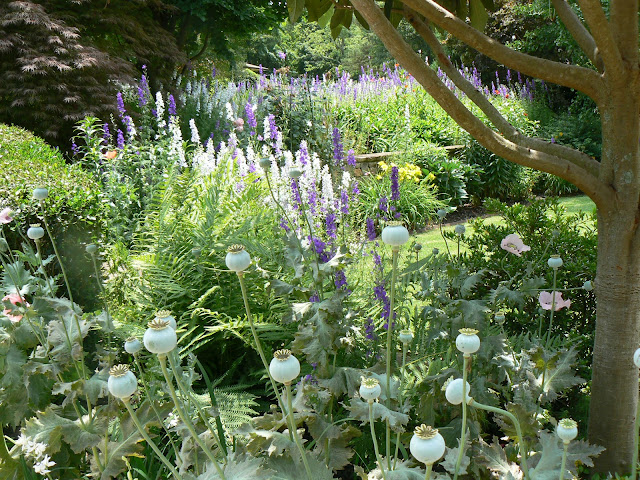 In late winter, I noticed that some poppies were coming up next to my front door in Atlanta.  That seemed odd, as the nearest poppy plant I had anything to do with was 40 miles away.

The plants, with their silvery-gray foliage, came up in pea gravel, next to a limestone stoop.  I left them to grow, and about three weeks ago, they began blooming.  The young couple who visited here from California week before last must have wondered why six tall flowers were blooming in front of one of the two boxwoods that flank the front door.

The mystery as to how they came to be there will never be solved.  The red, very double flowers, though, were very similar to the ones my mother always had in a strip outside her kitchen window.  When my parents were in their late eighties, the little strip grew up with weeds.   I finally got in and cleaned it all up.  The next winter, here came Mama's cherry red poppies again.  She was delighted when they bloomed in May, after an absence of years.  The seeds had been there all that time, just waiting for some smooth ground and air to germinate.

The poppies have been blooming ever since.  Each year, I've marked the poppies that looked best and saved those seeds in the refrigerator at her house.  Every spring, they've been coming up and making a show.  This year, I failed to mark the good ones, but most were the cherry red ones.  I think the plants morph, and you get a variety of colors.  One I saved was a pretty good dark lavender that was very ruffled.

The scene above is from Bob Clinard's Atlanta garden.  I missed seeing his poppies in bloom, but as you can tell, I caught the larkspur at its peak.  I like the look of the poppy seed pods in this gray-green form; they're very decorative.  Pretty soon, though, they'll turn brown, and I imagine Bob will pull them up.  He keeps a super neat garden.

Now, just as I am writing this, I've thought of something.  I believe I had some dried pods that were still intact in the kitchen at the farm.  I sort of remember bringing them back up here to put on the mantel in Mother's cornucopias at Thanksgiving.  Maybe I put them down beside the stoop, and some seeds dropped out.

This fall (the time to plant poppy seeds and all cool season annuals like bachelors' buttons, larkspur, ox-eyed daisies, etc.), I want to plant some Flanders Field poppies.  I found some packets my late husband had bought back in the early nineties.  I hope they're still viable.

In the meantime, I need to check at the farm and see how the poppy pods are coming along.  I still have a bloom on one of the plants by the front door.  And, I'm enjoying looking at the gray-green pods, but they'll soon have to be pulled up.  I don't know that I want poppies growing by the front door again.  It does look pretty weird.
Posted by Martha Smith Tate at 9:23 AM 3 comments: