Your mission, should you choose to accept it 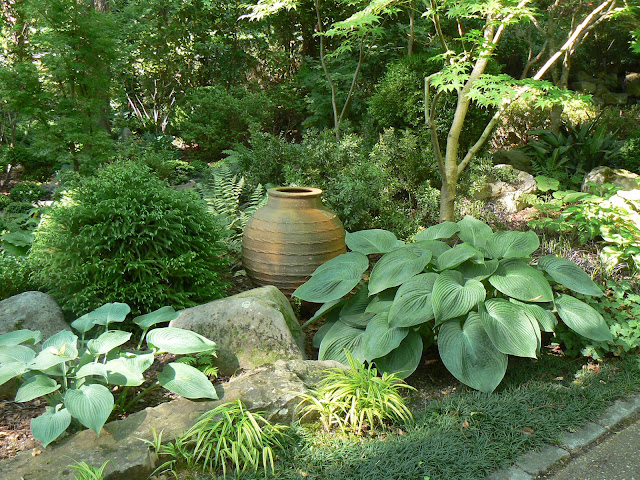 When I was a couple of years out of college, my friend Kathi Woods and I traveled around Europe one summer on a Eurail pass (Oops.  I've forgotten how to spell the train pass that a lot of us bought back then; it allowed you to hop on a train, travel first class just about anywhere on the continent).

Anyway, Kathi was fun to travel with because she would study the Europe on $5 a Day guide (!), and pick out a mission for each city we visited.  For instance, we'd have to find a rather obscure scene or object or statue, just to make things interesting.  One example I remember was this:  Whose heart is buried in a jar in the Pantheon in Paris?  I actually remember that one, though I've forgotten many of the  others, like the ship we had to find in Stockholm.

What does this have to do with the scene above?  The Atlanta Botanical Garden's annual Gardens for Connoisseurs tour is this Saturday and Sunday, May 12 and 13.  I am disappointed that I am going to miss it, as there are some really fabulous gardens to see.

So, I ran over to Bill Hudgins' house this afternoon to take some photographs.  The light was not good (finally, a clear, crisp day, but not good for photography, at least not in mid-afternoon), but I managed to get a few shots in.  I'm definitely going back.  I took 157 pictures, and I didn't even scrape the surface.  So many paths; so little time.

I am proposing a mission for those of you who attend the tour.  See if you can recognize where I was standing when I captured this scene.  I was going to make it a lot harder, as there are so many paths to take and so much to see.  For instance, I took a photograph of Hosta 'Thunderbolt', and that was going to be my proposed mission.  But, that's pretty hard, although Bill has it in several places (google the image, and see if you can locate it in the garden).

Anyway, the above view is easy enough, although Bill has so many great terra cotta jars and containers placed throughout the garden (we're talking several acres).  Also, look for his prized Japanese lanterns.  They're everywhere.  Also, he's changed portions of the garden to reflect his interest in modern Japanese landscape design.

I just checked the weather, and by Saturday, the sky may be overcast, which will make for good photography.  I will say, though, just as I was leaving today, I caught some leaves of an orangy (no such word) Japanese maple, backlit by the sun.  That made up for the harsh glare I encountered earlier.

Tickets may be purchased at the gardens, which are listed on the Atlanta Botanical Garden's Web site.  The gardens all look fascinating.  It should be a great tour this year.