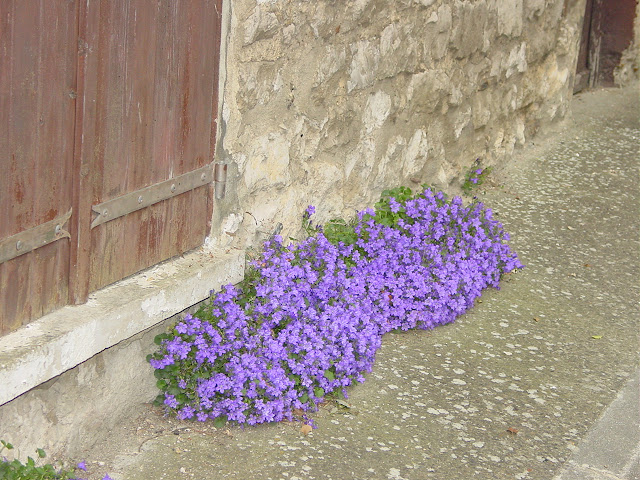 You would probably think I'm crazy if you knew how many times I've studied the very simple scene in this photograph.  An old door with faded paint and worn iron hinges.  Stone that looks haphazardly grouted by some mason long ago.  Flowers that may or may not have been planted on purpose.

I don't know how many times I've wondered how the French grow things that seem to come from only a crack where the sidewalk meets the wall.  Of all the photographs I took on a 2006 visit to Giverny, it's this one that I keep coming back to.  In fact, I was so inspired that I came up with a crazy idea that seemed to make sense at the time.

You'll remember that in May 2006, we didn't know the growing danger looming in the housing market.  I don't know how many developers had contacted me, even before my mother died in 2007, about buying her farm and turning it into a subdivision (never, ever would my brother and I have let this happen to this beautiful land).  One even tried to tell me that if she sold it to him, there would be no capital gains taxes to pay, even though my parents had bought the 151 acres in 1957.  I should have had him arrested.

Anyway, I saw the little village next to Giverny, and I thought, how wonderful it would be to build some stone houses out of old materials and have all the occupants be gardeners.  On my little rural street (which would be situated on the abandoned runway my daddy built on the farm in 1960), the houses would have slate or tile roofs, and we'd all have walled-in plots for flowers and maybe a few cabbages and herbs.  Further away, there'd be a large space for vegetable gardening and an orchard where little blue star flowers would come up in the grass in spring.  I can't tell you how many nights I lay awake planning this little street that would look nothing like any other subdivision.  It wouldn't look like a street in a movie set either, and all the materials would be old and put together properly.

Well, thank goodness I didn't have the gumption to do any of this.  When the crash came, I'd have gone down in flames, or perhaps in a pile of stone.

Still, I dream of a cottage (I have stacks of cut granite from an old lodge sitting all along my driveway, plus 4,000 cobblestones piled up at the farm - another story for another time).  I'd have gravel  or simple pavement going right up to the walls, and then you'd see a little mass of flowers like above.  All very simple and somehow old.  A climbing rose would ramble up the corner of the house, and a little side yard would be overflowing with flowers.  On the south wall would be espaliered apple trees.

Okay.  Time to wake up and face reality.  But that's the way with the love of flowers and ancient stone and old wood and such.  One can always dream and imagine, and, even though time is passing quickly, it's not out of the realm of possibility that some of it might come true one of these days.