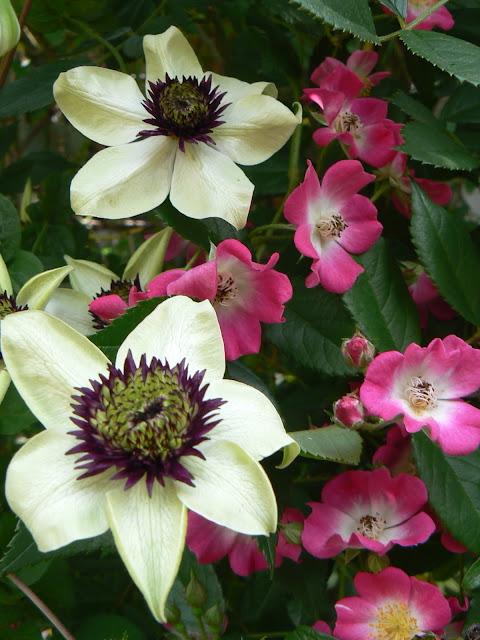 Several readers reminded me that Lyndy Broder's garden was featured on an episode of A Gardener's Diary on HGTV.  I meant to include this fact in yesterday's post, but there was so much to say about Lyndy and how she has made such a big garden in such a short time that I forgot to mention the show.

The above photograph was actually taken in Anna Davis' garden when it was on the Atlanta Botanical Garden's Gardens for Connoisseurs on Mother's Day a few years ago (note: the first flush of roses will be over this year on that weekend, due to high temperatures in April and May.)

Still, this image is a good example of how beautifully clematis combine with other flowers.  Here, Anna has trained Clematis florida var. sieboldiana with a single pink rose.

Back to Lyndy.  The first time I ever saw the above clematis was on the cover of a Wayside Gardens catalog at least 20 years ago.  I was entranced.  I also made an assumption that this was a native species, thinking of Cornus florida.  I should have known better.   I obviously wasn't thinking, since "sieboldiana" or "sieboldii" referred to the German Philipp Franz von Siebold, who, as far as I know, never stepped foot in Florida.  This clematis originated in China and came to Europe via Japan.  Lyndy straightened me out on this.  I also did the same thing with Clematis montana for years, thinking that this was a clematis native to the state of Montana.  I blame all this on Clematis texensis, which really is from Texas.  That's my story, and I'm sticking to it, however embarrassing.

Anyway, Lyndy had a spectacular cultivar of C. florida called 'Vienetta'.  It had a pom pom center that was even more impressive than the species.  My photos were dark, though, so I'm going to have to work on them to see if I can lighten them up.  By the time we got around to this 150th clematis, the sun was bearing down hard, and I lowered the light too much.

Lyndy also has some great clematis combinations in her garden.  One of my favorites was the light blue 'Arabella' coming up through the pink version of evening primrose.  There's just no end to what effects can be had with clematis.  One of my favorites ever was Margaret Moseley's C. jackmanii threading up through a purple smoke tree.  At Lyndy's, I still think of the pure white, old fashioned French clematis 'Huldine' having as its background the lacy branches of Pseudolarix amabilis.  A splendid combination.

Posted by Martha Smith Tate at 7:08 PM No comments: