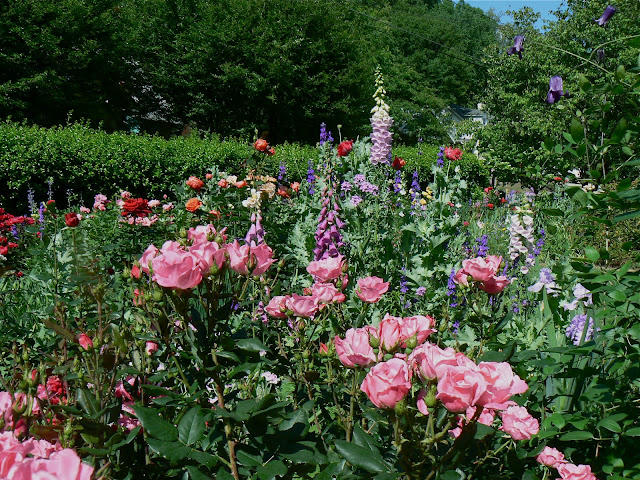 Diana Mendes posted some photographs of her garden recently on Facebook.  Someone asked, "Where do you begin?  How do you know what to add?"

I wondered this myself.  Diana's stunning cottage garden in front of her Virginia-Highlands is jam-packed with flowers.  Each week it changes, meaning that when one flower finishes, another takes its place.  For instance, Diana was lamenting the fact that most of her many bearded irises had already bloomed out.  I thought, "How could there be any more flowers than there are right now?"

On Sunday, roses were the stars of the garden.  Diana has lots of them and only knows the name of a couple.  There is one red rose that intrigues everyone who comes to the garden.  It has brilliant, large red flowers, and the foliage is pristine.  The shrub is compact and shorter than most of the other roses.  It's a red rose we all need, so I'll post a photograph soon to see if some rosarian out there can make an identification.  It's intriguing.

What's more intriguing is, "How does she pack it all in?"  I went there in late October, and the garden was overflowing with color.  Diana pointed out that I need to come back in a couple of weeks from now, as the garden will be changing again, and lilies and many perennials will be coming into bloom.

Amazingly enough, Diana is constantly adding to the garden.  She has already been out shopping for new flowers and still has trips to make to some favorite nurseries.  I'll be interested to see how she'll put anything else into the ground.  Her garden has even jumped out onto the strip between the sidewalk and the street, where larkspur have naturalized in the shade of Styrax japonica trees she planted.

"I threw some spent plants out last year, and this is what happened," says Diana.

If you put in "Diana Mendes" in the white space at the top of the blog and click on the magnifying glass, you can read Diana's story.  You'll see a rose that a reader identified as 'Cinco de Mayo'.  When I went in late October, there was a huge variety of chrysanthemums in bloom, and the roses were as fresh as if it were spring.

One last note:  It was very, very difficult to choose a view of this garden from the photographs I took.  Every view was an explosion of color.  I'll be sure to post some more from time to time.  Stay tuned for more beauty and some unbelievable roses.