A new peony arrives; an old one survives 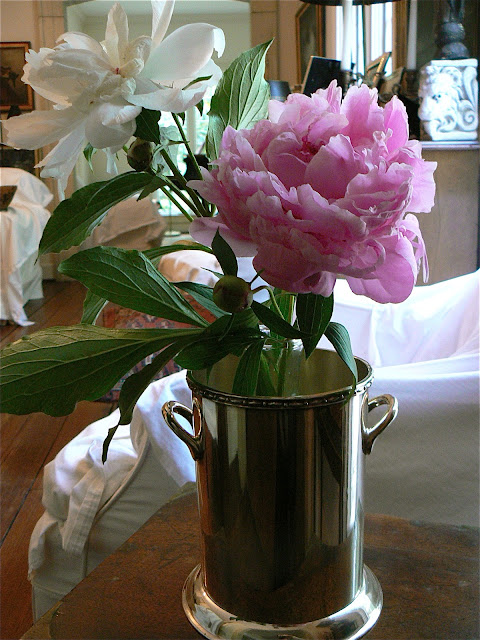 First, I must apologize for the unpolished silver and the shabby sheets in the background.  You'll note that I have a spent peony on the left, and a new, fresh pink one on the right.  Both are in an olive jar which I plopped into the tarnished silver container.  I was after a photograph of the newest addition - a luscious pink, raggedy, fragrant peony - to the now confused looking sunken garden on the side of the house.

Speaking of sinking, I have returned to some old bad habits.  I used to order out of catalogs and go to nurseries and buy plants with no earthly idea where I would put them.  It was an addiction.  I ended up with a huge nursery of my own, with dozens of potted plants with nowhere to go.  Finally, I reined myself in and just stayed out of garden centers for several years.  It was torture.

Now I'm back.  I had to buy some light bulbs the other day, so I thought, just for fun, I'd see what the garden area had to offer.  I fell off the wagon.  I could hardly get the viburnum, spirea, banksiae rose, crossvine, clematis and peony into my car, especially with two dogs in the back seat.

I'm happy to say that all of these purchases have been planted, and I've moved the Viburnum plicatum already (it was labeled Viburnum opulus, which it was not), as it was way too close to another shrub.  I'm going to have to do the same with the spirea.  It's going to need more room, as well.

But back to the peony.  I saw it in bud only, but I was hoping that it would be a big, blousy pink flower like the one my mother had, but which has been lost.  I think it's even prettier than Mother's.  I also think it will like its new home.  I was careful to plant the "eyes" at ground level so they can capture the necessary cold during winter.  This fall, I'll put some fireplace ashes around it, as the late Berma Abercrombie always did.

There's some good news about Mother's 'Festiva Maxima' peony, which I thought I had lost when the tree fell on the cottage, and it was smashed for at least a month.  Before I moved it up here, I had found the peony chopped down at the farm, after it had lived there for 50 years, less than half of its life.  A well-intentioned friend with a weed eater had cut it down over and over before I realized what had happened.  I was able to salvage three pieces.  Two of them survived, and one even bloomed one year.  When the tree was removed last June, there was no sight of them.  I mourned in this blog about the loss of what had provided the most fragrant, big bouquets for years and which was definitely an heirloom.

The two plants came back up this year.  They didn't bloom, but they will next year, I think.  I was disappointed that for the first year ever, my 'Mrs. Franklin D. Roosevelt' peony did not have a single bloom.  I've got to figure out what has happened.  It's a lighter pink than the flower I just purchased, but it is exquisite.

Which leads me to a very embarrassing admission.  The tag of the one I just bought only said peony, no cultivar listed.  There were two words that said "gran altura".  I decided to look it up to see if it was a new introduction and to make sure that it is an early flowering type (the later ones melt here with the heat).  Those of you who know Spanish are already laughing.  I should have known, as it said "tall height" right by the Spanish words.  So, this is not Paeonia lactiflora 'Gran Altura'.  This is an unknown peony that is very tall in Spanish, as well.
Posted by Martha Smith Tate at 3:25 PM 2 comments: