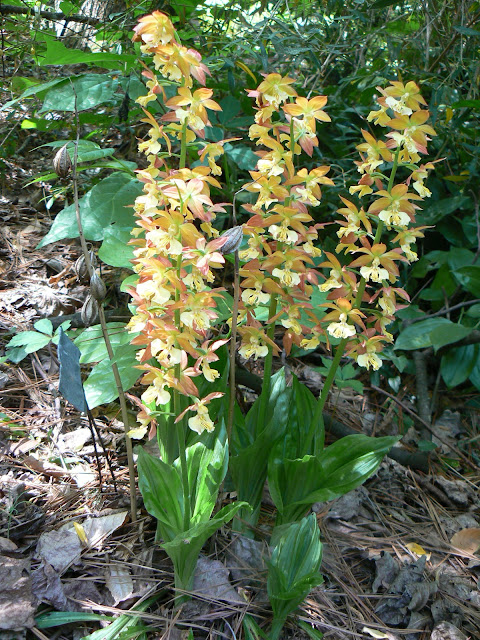 First, I have to say that these are not my orchids.  They belong to Ozzie Johnson, and he has several clumps growing in an area in his front woodland.  In another part of the garden, he has some with all yellow flowers.  These latter may be Calanthe sieboldii.

But thanks to Kevin Holcomb of Atlanta, I now know that my mystery orchid, which appeared out of the blue in my woods in the mid-90's, is probably one of the Takane hybrids of Calanthe discolor.  The ones pictured above almost certainly are.  Contrary to my first assumption, my orchids are not native, but are Japanese.

If you write in "Calanthe" into the search box at the top of this blog, you'll be taken to a post on Monday, August 29, 2011.  This is when I wrote about discovering an orchid growing in my woods.  I still don't know where it came from, but I am now anxious to have more.  I'm always looking for something that will flower in the shade.

Also, if you google Plant Delights calanthe, you'll go to Tony Avent's catalog where you'll see the orchid above.  Mine is more yellowish, especially this year.

But I have an announcement to make:   I now have two plants growing side by side.  Ozzie told me he thinks they are the same plant, but I don't think so.  I've gotten down on my knees to examine, and I think I now have two distinct plants.

In addition, I cleared all the ivy from around a stump, so the other calanthes (they are about 30 feet away from the original discovery) are shooting up now and will bloom next week.  They are different colors.  One, if I remember correctly, is white and brown.

According to Tony Avent, I should expect colonies to form.  Ozzie has me beat by far - he already has two nice patches of the ones pictured above.  I've cleaned out all around both my areas, so if any seed drop, I can expect some more orchid blooms in seven years, according to Tony.  But then he turns around and says I'll have a colony in three years.  I'm not sure what to make of this.

I've already calculated how old I'll be in three years and in seven years.  I guess if I get to live that long, I'll be delighted to have more orchids growing in my woods.  But, I'll forever wonder how they got there.  We built this house near their location, although we lived at the back of the property before that.  Why would someone plant the orchids so far from a house?   I don't think there's a soul around who can tell me, so I am just going to enjoy the fact that they came so unexpectedly and inexplicably and that they are very easy to grow.  A happy accident, as we used to say on A Gardener's Diary.
Posted by Martha Smith Tate at 7:35 PM 1 comment: